NASA Reveals The ORION SPACE CAPSULE. The Sumbitch May Take Us To Mars 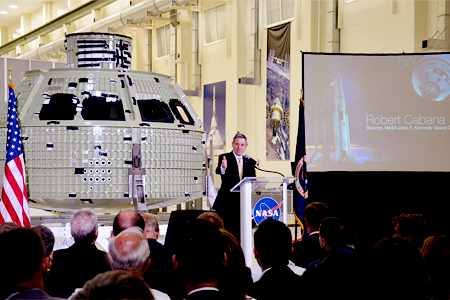 NASA has unveiled a new passenger module with the ultimate goal of taking astronauts to Mars. Dubbed Orion, the capsule is scheduled to fly its first manned mission in 2021. It arrived at Florida’s Kennedy Space Center last Friday, where it will undergo development and testing before an initial, unmanned trial flight in 2014.

“The vehicle we see here today is not a Powerpoint chart,” Space Center director Robert Cabana told SPACE.com. “It is a real spacecraft moving toward a test flight in 2014.” The capsule resembles the famous Apollo 11 craft that took Neil Armstrong and Buzz Aldrin to the moon in 1969, but NASA is keen to stress that Orion is much more advanced in terms of navigation and life support features.

The announcement comes at a difficult time for NASA, as private space transport firms such as SpaceX increasingly threaten its ability to win support and funding from sceptical politicians — last week, SpaceX demonstrated a new booster rocket capable of producing 147,000 pounds of thrust. When Orion launches, it will use NASA’s own launcher technology, which is known as the Space Launch System and has been described as a “gigantic rocket” akin to the Saturn V.