Archives
« Lucas Shuts Down Fan ‘Star Wars’ Marathon. He Is All That is Douche.
Cliffy B Says ‘Wii U’ Haters Talk Shiz, Will Buy It Anyways. »

The Triangulum Galaxy Is A Faint Cosmic Swoon! 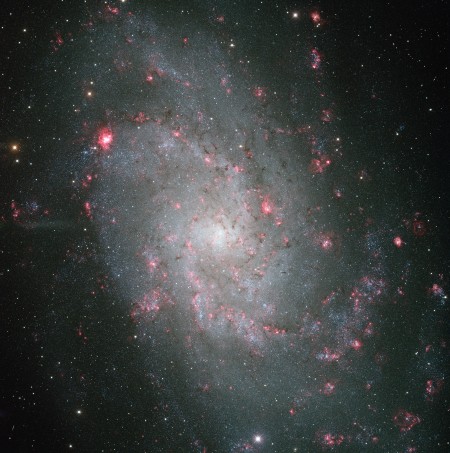 I’ve never seen it naked eye (Andromeda is actually pretty easy to spot from a dark site) but I’ve observed it many times with binoculars and a small telescope. Davide had a bit of an advantage though: this picture is from observations using the 4-meter Mayall telescope at Kitt Peak, a fine instrument indeed. The picture uses mostly “natural” color, adding together blue, green, and red-filtered images.

Also included in that summation is one more image using a filter that only lets though a very specific wavelength of light associated with warm hydrogen. Called HÎ±, this is given off by gas clouds forming stars, and is shown here as the sharp red color. So wherever you see those blobs of red, stars are forming at a furious rate. And look to the upper left: see that particularly large and bright nebula? That is NGC 604, a monstrous star-forming region that’s 1500 light years across or more; it puts our own Orion Nebula to shame. It’s one of the largest stellar factories in the Local Group of galaxies; if it were as close as Orion it would be visible in the daytime!

One other thing: the spiral arm to the left and below NGC 604 appears to be sharply defined and almost straight. I’m thinking that’s a perspective effect, but the arm itself does appear pretty well-defined  in a far-infrared image as well. It’s interesting what you find looking at such fine images, and comparing them at different wavelengths.

Tres cool! With excellent exposition as to what we’re seeing, per usual, by Phil Plait.