Archives
« Charlie Cox reportedly returning as Daredevil for multiple projects. Multiple fucking projects!
New ‘Exorcist’ Trilogy picked up by Universal pictures for a cool $400 million. A Devilish amount of money or some shit! » 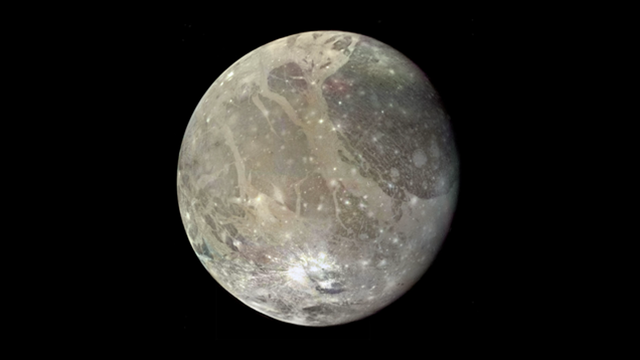 Hubble is doing us all a solid, finding some fucking water vapor on Jupiter’s moon. Cause lord knows, there ain’t enough here on Earth right now. You know, given all the fucking droughts. Given the fact that I can’t fucking breath outside here on the East Coast because the West Coast is on fire. Okay, fine. A tenuous connection to this dope news, but cut me some slack. My air is poison.

Scientists have discovered the first evidence of water vapor on Ganymede, Jupiter’s largest moon. They used new and archival datasets from the Hubble Space Telescope to find the vapor, which forms when ice on the surface sublimates and turns from solid to gas.

A team led by Lorenz Roth of the KTH Royal Institute of Technology in Stockholm, Sweden examined data captured by Hubble’s Cosmic Origins Spectrograph in 2018 and images the Space Telescope Imaging Spectrograph obtained between 1998 and 2010. Ultraviolet images captured by the STIS in 1998 showed “colorful ribbons of electrified gas called auroral bands,” according to NASA (which launched Hubble as a joint project with the European Space Agency).

Researchers previously believed that atomic oxygen may have caused discrepancies between UV images that were captured over time. However, using data from the Cosmic Origins Spectrograph, Roth’s team found that there was barely any atomic oxygen in the moon’s atmosphere. As such, there had to be another reason for the discrepancies.

The temperature at Ganymede’s equator may become warm enough for surface ice to release some water molecules. When they re-examined the relative distribution of the aurora in the UV images, Roth’s team found that differences between them match up with where water would be expected in the moon’s atmosphere.

Previous research indicated that Ganymede may hold more water than in all of our oceans. The moon’s ocean is believed to be around 100 miles below the surface, so the vapor isn’t from there. Water on the surface is frozen due to the moon’s temperatures.

The finding arrived ahead of the ESA’s wonderfully named upcoming mission, JUICE, or JUpiter ICy moons Explorer. The mission should launch in 2022 and arrive at Jupiter in 2029. It will then spend at least three years examining the planet and three of its largest moons. JUICE will pay special attention to Ganymede, both as a planetary body and possible habitat.

“Our results can provide the JUICE instrument teams with valuable information that may be used to refine their observation plans to optimize the use of the spacecraft,” Roth said in a statement.

NASA’s Juno mission has also been studying Ganymede and Jupiter’s environment (aka the Jovian system) since 2016. The agency says examining the Jovian system and understanding its history “will provide us with a better understanding of how gas giant planets and their satellites form and evolve. In addition, new insights will hopefully be found on the habitability of Jupiter-like exoplanetary systems.”