Archives
« ‘Interview With The Vampire’ TV Series swooping onto AMC. Fucking bizarre, but sure!
‘Dune’ has been delayed another three fucking weeks, now dropping October 22 » 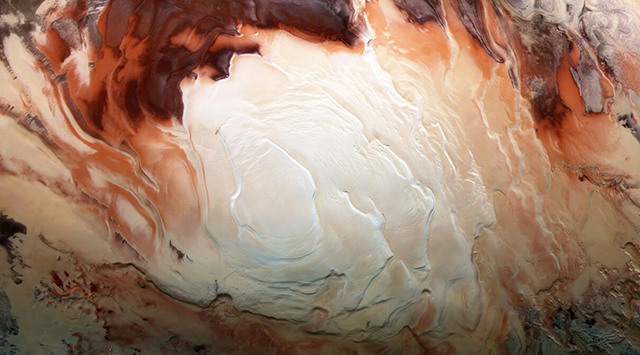 NASA scientists have identified more subsurface lakes on the Red Planet, folks. While they are likely frozen, I still find this to be a bad ass development.

Researchers peering at layered deposits on Mars’ south pole found what appear to be dozens of subsurface lakes, though many of them are in areas where water would be frozen.

The research team measured the volume of those deposits, which contain alternating layers of dust, water ice, and frozen carbon dioxide—dry ice. The layers contain the story of Mars’ climatological history; when the planet’s tilt was slightly different, wintry conditions formed the frozen layers that scientists now inspect using surface-piercing radar. (Like Earth, Mars has its own ice ages, the most recent of which it emerged from 400,000 years ago. Discover Magazine has a great explainer on how the planet’s tilt affects its seasons and climate.) The team’s results were published in the Geophysical Research Letters earlier this month, and they follow up on the 2018 finding of water ice beneath the planet’s south pole.

“We’re not certain whether these signals are liquid water or not, but they appear to be much more widespread than what the original paper found,” said Jeffrey Plaut, a research scientist at NASA’s Jet Propulsion Laboratory, in an agency statement. “Either liquid water is common beneath Mars’ south pole or these signals are indicative of something else.”