Archives
« ‘John Wick 4’ adds Donnie Yen as an old friend of Wick. This rules so fucking much!
FBI says Russian Hackers are to blame for shutting down much of US beef supply. What a weird fucking future, man. »

Michael Keaton’s return as Batman in ‘The Flash’ teased in image from movie’s director! 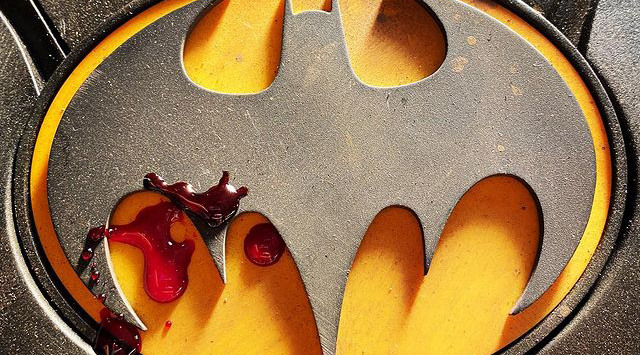 Will Keaton be in The Flash? Will he not be? Folks, we finally got some fucking clarity from the director himself. Dude has officially teased Keaton’s return on Instagram. Fuck yeah.

Hit the jump to check it out!

From the looks of things, director Andy Muschietti’s upcoming The Flash is set to expand the DCEU in a significant way by using the titular speedster’s penchant for mucking up timelines in order to broach the larger DC multiverse, and bring another, familiar Batman back to the big screen.

Ben Affleck’s Bruce Wayne will be joined by Michael Keaton’s as The Flash’s story brings the Dark Knights together in order to do something involving Barry Allen. Though details about the new movie are still thin, today, Muschietti posted a cryptic image of the emblem from the Batman suit Keaton wore in Tim Burton’s 1989 film. Aside from some dust, the only think of note about the photo is the globules of blood dripping from Batman’s icon, suggesting that someone’s just gotten a royal beatdown.

The blood staining the yellow of Batman’s icon also reads vaguely like an allusion to Watchmen, which likely isn’t coincidental, but doesn’t necessarily mean anything about The Flash’s plot. We’re still a year out from The Flash hitting theaters, meaning we’re going to start seeing more concrete information about it in the upcoming weeks and months that may add a new significance to this new photo.