Freshly Made Interstellar Plutonium Has Been Found in Pacific Ocean. Space Up In Our Shit! 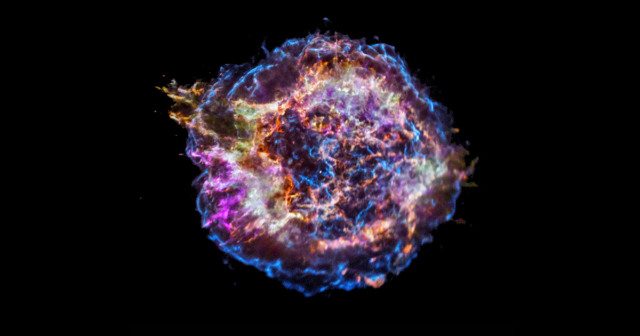 Some motherfucking cataclysmic event happened in outer space, and that shit sent interstellar plutonium into the Pacific ocean. Like, I love this sort of shit. Humanity usually thinks themselves divorced and separate from the cosmos. But nah, motherfucker! It’s definitely interacting with our asses, and this is a fantastic reminder.

Traces of rare forms of iron and plutonium have been found at the bottom of the Pacific Ocean, after some kind of cataclysm in outer space created this radioactive stuff and sent it raining down on our planet.

The extraterrestrial debris arrived on Earth within the last 10 million years, according to a report in the journal Science. Once it hit the Pacific Ocean and settled to the bottom, nearly a mile down, the material got incorporated into layers of a rock that was later hauled up by a Japanese oil exploration company and donated to researchers.

“Just knowing that there’s plutonium there is amazing,” says Brian Fields, an astronomer at the University of Illinois at Urbana-Champaign who was not part of the research team. “Now we only have tiny amounts of material — after all, we’re talking about hundreds of atoms here. But we should be grateful for that, because they are freshly made from exploding stars.”

Freshly made specimens like these could help scientists understand how the universe forged elements heavier than iron, such as gold, platinum, uranium and plutonium. “These are the elements where we are still in a mystery,” says Anton Wallner, a physicist with the Australian National University in Canberra who led the international team that did the new work. “We do not know exactly where they are produced and how much is produced in different sites.”

Figuring out the source of these elements is a big deal for astronomers, who already pretty much know where the rest of the periodic table comes from. Hydrogen and helium got born in the Big Bang, for example, and elements such as carbon and oxygen form in the cores of stars — that’s why beloved astronomer Carl Sagan liked to say, “We are made of star stuff.”

Astronomers believe the very heaviest elements must come from an environment more intense than an everyday star. One possibility is when a massive star goes through its death throes and explodes as a supernova.

The powerful blast would send elements spewing out in all directions, and if a supernova is nearby, says Fields, “all of these elements that are made in the supernova get delivered to us and literally rain upon our heads, literally rain down on the Earth.”

About 25 years ago, he and a couple of colleagues suggested a way to find some of that kind of debris. They pointed out that a supernova makes stable elements, but it also makes certain unstable, radioactive forms of elements that last for only millions of years before decaying.

These particular atoms would live just long enough to find their way to Earth from an exploding star and be discovered by scientists — but wouldn’t be mistaken for the stable elements that have been around since the Earth formed billions of years ago.

Researchers went hunting for these treasures from outer space and soon started to find a telltale form of iron called iron-60 in deep-sea rocks, Antarctic snow and even samples from the moon.

All of these results suggested that some kind of stellar explosion, probably a supernova, happened in Earth’s cosmic neighborhood about 3 million years ago and littered the area with radioactive iron.

This latest study of iron that got incorporated into the slowly growing layers of a deep-sea rock confirms that notion — but also suggests yet another dose of interstellar iron arrived around 6 million years ago. “So there’s not just one exploding star — there’s two,” says Fields.

What’s more, in this study the researchers were able to detect atoms of distinctive plutonium-244, which does not exist naturally on Earth. By looking at the quantities of plutonium and iron in the layers of rock, they could compare what they saw with what models predict about the production of these elements by cosmic events like supernovas.

Their analysis suggests that something else must have contributed beyond supernovas, says Wallner. Astronomers have long suspected a smashup between two neutron stars might be another potential source of heavy elements.

“Our data actually suggests that it might be that both scenarios are necessary,” says Wallner. “It’s both. It’s supernovae explosions that produce a part of these heavy elements but also neutron star mergers or any other rare events.”

Hendrik Schatz, a physicist with Michigan State University who was not part of the research team, says these new results are amazing. While tantalizing hints of this form of plutonium have been found in the past, he says, “we were always hoping that someone would finally get a large enough sample and find that in the deep-sea ocean sediments. We’ve kind of waited for that for a long time.”

In his view, the new findings add to other evidence that the heaviest elements, such as plutonium, can’t be generated by just regular old supernovas. “It must be some rare event, something else,” says Schatz. “There are a lot of pieces of evidence that point to multiple sources. Neutron star mergers are probably one of the more important sources, but at this point it doesn’t look like they can explain all the observations.”

Measurements of other kinds of short-lived elements could eventually help sort all this out, says Fields. And he notes that while exploding stars might occasionally sprinkle our world with stardust, there’s currently nothing massive nearby that could go supernova and send a blast of life-obliterating radiation our way.

“These stars are not subtle. We know exactly where they are,” says Fields, “and there are none that are threatening us today.”