Astronomers Capture a Star Being Stretched Out and Wrapped Around a Black Hole. Called “Spaghettification” Which Rules, Too. 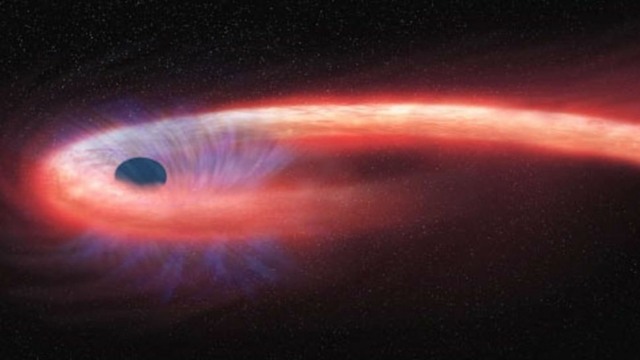 For the first time ever, astronomers have caught a star being spaghettified by a black hole. Not fucking around, that’s the term! It’s used to describe when a star has wrapped its own dumb ass around a supermassive black hole.

For the first time, astronomers have caught a glimpse of a star being “spaghettified” as a supermassive black hole rips it apart.

After getting too close to a colossal black hole — located 750 million light-years from Earth and weighing 30 million times the mass of our sun — the hapless star was ensnared by the hole’s gravity and devoured.

Black holes are messy eaters that like to play with their food. As it drew the star closer, the black hole’s gravity produced powerful tidal forces, stretching the star out into a long noodle shape and producing a bright flash of optical light, X-rays and radio waves that telescopes on Earth detected .

Related: 9 ideas about black holes that will blow your mind

Although astronomers have spotted bursts like this and attributed them to “spaghettification” for decades, only recently did a group of researchers working at SRON Netherlands Institute for Space Research and Radboud University, also in the Netherlands, observe a star being spaghettified around a black hole.

The researchers captured the image by spotting unusual absorption line patterns around the pole of the black hole. It revealed a long strand wrapped many times around the black hole like a ball of yarn. Usually, absorption lines (the gaps observed in the light spectrum when matter absorbs light of very specific wavelengths) can only be spotted when we look at the equator of the black hole, which is the line along which the black hole spins and where a flow of material called an accretion disk orbits. Seeing absorption lines at one of the poles led the scientists to conclude that they were looking at the spaghettified remnants of a freshly shredded star.

“Moreover, the absorption lines are narrow. The Doppler effect does not broaden them like you’d expect when you would be looking at a rotating disk,” lead author Giacomo Cannizzaro, a doctoral student at SRON, said in a statement. (The Doppler effect describes shifts in the wavelengths of emitted or absorbed light depending on whether the source is moving towards or away from the observer.) Not seeing this shift meant that the material wasn’t orbiting the black hole — a big clue that the researchers weren’t just looking at another accretion disk.

Spaghettification happens because of the sharp increase in gravity that an object experiences as it nears a black hole. The effect is so pronounced that an astronaut falling feet first into a black hole would have their legs sucked in more powerfully than their head, stretching them out into a long strand of human spaghetti.

For a star the process is no less dramatic. The outer atmospheric layers of the star are the first to be stripped, circling the black hole to form the tight yarn ball the researchers observed. The remainder of the star soon follows, accelerating around the black hole and getting spun out into an enormous jet of energy and matter that produces a distinctive bright flash. Only 1% of the star ever gets swallowed by the black hole, Live Science previously reported.

This is not the first time that this particular star’s evisceration by a black hole has attracted scientific attention. A 2021 research paper published in the journal Nature Astronomy details the detection of a high-energy neutrino flung out into space by the event. The particle travelled more than 750 million light-years before smashing into the IceCube Neutrino Observatory in Antarctica. The particle had 10 times more energy than could be achieved by the Large Hadron Collider near Geneva, Switzerland, the most powerful particle accelerator in the world.

The researchers published their findings March 24 in the journal Monthly Notices of the Royal Astronomical society.