Archives
« Monday Morning Commute: The Gathering of the Sons of Samega!
Dave Bautista Starring In Rian Johnson’s ‘Knives Out’ Sequel and Fuck Yeah! »

NASA’s Voyager 1 Probe Detects The Steady Hum of Plasma in Interstellar Space. The Cosmos is Glorious! 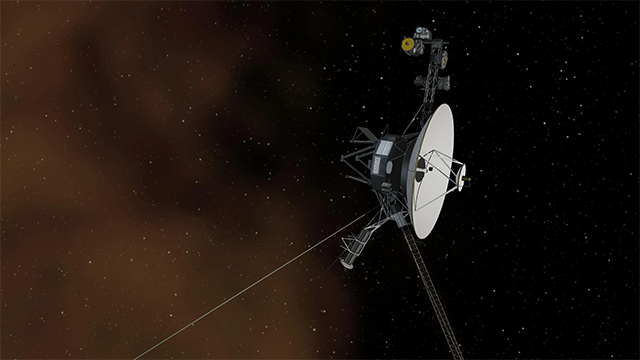 We’ve sent Voyager 1’s ass into deep space. Interstellar space, even! Now out there, it’s discovering all sorts of dope shit. Take this shit for example: the steady hum of plasma.

Voyager 1—the most distant human-made object—has made yet another remarkable discovery having to do with interstellar space.

It’s steady, persistent, and long-lasting: a low-frequency hum that’s droning away at approximately 40 Hz. This is evidence of plasma, matter so hot that electrons have been stripped away from their atoms, resulting in an ionized, or charged, gas. On its own, the detection of plasma is insignificant. It is, after all, one of the most abundant forms of visible matter in the universe. What is significant, however, is where this plasma was detected: the Very Local Interstellar Medium.

Even more significant is that NASA’s Voyager 1 managed to detect weak plasma vibrations in this remote region of space. Previously, the probe detected strong perturbations in the plasma, known as plasma oscillation events, triggered by coronal mass ejections from the Sun. In other words, Voyager 1 recorded the natural background, or ambient, levels of plasma that exist in deep space, and without the Sun’s meddling influence. Details of this discovery were published today in Nature Communications.

Launched in September 1977, Voyager 1 is now more than 14.1 billion miles from Earth, making it the farthest human-made object (Voyager 2, its sister probe, is 11.8 billion miles away). Voyager 1 is now outside the heliopause, an area sandwiched between the hot solar plasma and the cooler interstellar medium at the outer reaches of the solar system. The probe, traveling at 38,000 miles per hour, is now venturing through interstellar space, a region characterized by exceptionally low densities of matter.

Unlike its sibling, Voyager 1 can measure the vibrations of plasma in the interstellar medium, thanks to its onboard Plasma Wave System.

“These vibrations occur at a very specific frequency, called the plasma frequency, which is directly related to the density of the plasma Voyager is passing through,” Stella Ocker, a PhD candidate at Cornell University and the first author of the new study, explained in an email. “By measuring how the plasma frequency changes over time, we can build a map of how the plasma is distributed along Voyager’s trajectory, and learn more about the processes that determine how that plasma behaves and interacts with particles and magnetic fields in the interstellar medium.”

Since 2012, Voyager 1 has detected eight distinct plasma oscillation events, which ranged in length from a couple of days through to a full year. These events are caused by instabilities in the electron foreshocks of advancing shockwaves produced by the Sun.

Beginning in 2017, however, Voyager 1 began to detect a weak, yet steady and persistent, plasma signature outside of these energetic events. Called a “plasma wave emission,” the newly detected signal is narrower than the plasma oscillation events, holding steady at about 40 Hz. What’s more, the signal has persisted for nearly three years, which “corresponds to a distance travelled by the spacecraft of about 10 au,” which is roughly 930 million miles, according to the paper. The plasma wave emission, with its narrow bandwidth, low amplitude, and multi-year persistence, “appears to be distinct from the shock-generated [plasma oscillation events],” as the astronomers write in their study.

That Voyager 1 was able to detect this low-frequency hum was unexpected.

“The signal of these vibrations is hiding just above the noise threshold of the Voyager 1 Plasma Wave System instrument, so when we initially dug into the data, we weren’t really expecting to find anything like it,” Ocker said. “This detection really pushes Voyager 1 to the limits of what it can do.”

The signal may be weak, but it’s stronger than scientists previously thought. That’s an exciting result, as Ocker explained. “We find these weak vibrations even when there are no coronal mass ejections from the Sun, which means that we are now capable of measuring the frequency of these vibrations, and therefore the plasma density, whenever we want,” she said.

What’s more, measurements of the plasma density along Voyager’s path can yield new data about the solar system’s stellar environment. “The solar system is actually moving through the interstellar medium, and Voyager 1 is traveling in a similar direction as the Sun, so in a sense Voyager 1 is scouting out the conditions of the interstellar medium ahead of us,” said Ocker.

The new research now raises some important questions, such as the physical source of these extremely weak and constant plasma emissions and why the team was only able to detect these vibrations starting in 2017. The Voyager 1 mission is expected to last for several more years, which will surely help. That said, Ocker is holding out for a future interstellar mission, one that “would be able to continuously measure the density of space to even higher precision than Voyager.”

Thankfully, such a project is already in the works. It’s amazing to admit, but our species now has a presence in in the interstellar realm.