Hubble discovery of strange exoplanet makes a case for “Planet Nine” in our Solar System! 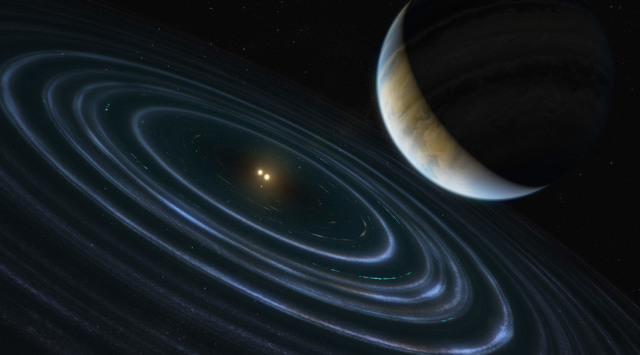 Per usual, Hubble out here doing work. The latest? The discovery of an exoplanet whose orbit is flat out fucking eccentric. Said orbit? Makes a case for the orbit of the theorized Planet Nine in our own solar system.

Scientists have long theorized about a “Planet Nine” in the Solar System with a strange orbit, and there’s now more evidence to suggest it’s possible. Researchers using the Hubble Space Telescope have determined that a jovian exoplanet 336 light-years away, HD 106906 b, has an orbit so eccentric it travels past the edge of its binary star system’s debris disk and circles every 15,000 years. It’s as if Jupiter traveled beyond the Kuiper Belt. If Planet Nine exists, this is how it might orbit the Sun.

People first discovered the planet in 2013, but it took Hubble’s accurate measurements (including historical info) to calculate the orbit. It’s the first planet of this kind known to have this kind of oddball path.

It’s not certain how HD 106906 b achieved this orbit, but the leading theory postulates that it formed close to its host stars, and drag within the gas disk pulled it inward. The gravitational effects of the two stars shot it outward, but a passing star stabilized the orbit and prevented the world from becoming a rogue planet.

The findings might also offer a rare peek at the early days of star systems, including ours. This star system is ‘just’ 15 million years old — you apparently don’t have to wait long for a Planet Nine-like orbit to form. Young stars frequently have active cosmic neighborhoods, and this is proof.

There are many unanswered questions, but some of them may be answered relatively soon. Teams hope to use the James Webb Space Telescope to not only confirm their data, but determine if the planet captures material on its way out and even has a mini-system of debris. As unusual as HD 106906 b is now, it might be stranger once astronomers have had a closer look.