Scientists have detected an unexplained glow in deep space. Don’t fuck with it, fellas! 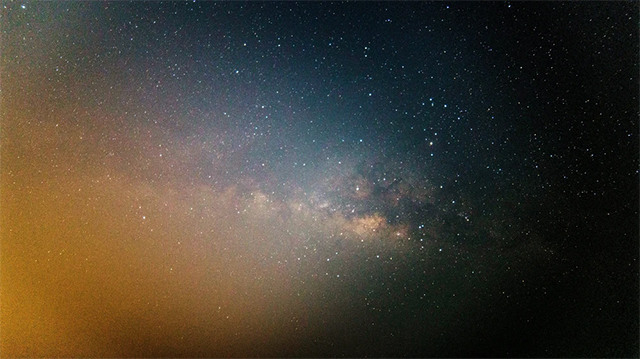 On one hand, it’s pretty fucking cool that scientists have detected an unexplained glow. In the dark of deep space. On the other hand, you know, please don’t fuck with it.

Don’t let its inky black appearance fool you—the night sky is actually full of millions of pinpricks of light flooding in from ancient stars and bouncing off space dust. And what we’ve measured so far may only be just the tip of a much older and brighter iceberg, a team of astronomers has discovered.

Using images taken by the New Horizons spacecraft after it sailed past Pluto and into deep space, a team of researchers were able to make some of the most accurate estimates yet about the total sum of light in the universe. And after adding up all the known light, they discovered that there was still a leftover cosmic glow that couldn’t be explained by existing data.

These findings were published this month on the arXiv preprint server, and have been accepted for publication in The Astrophysical Journal.

The discovery of this unexplained cosmic light is fascinating, and Marc Postman, a co-author on the paper and an astronomer with the Space Telescope Science Institute, told Motherboard in an email that astronomers had a hunch they might find something interesting lurking in the dark, but they had no idea it’d be something like this.

“The quest to measure the total energy of all stars and galaxies has been a long standing pursuit,” explains Postman. “The motivation of the New Horizons team to undertake this project was simple—to see how dark space really is—in other words, how much light can we detect when we [use] a telescope looks at a random patch of sky?”

Previous experiments have been done using images from the Hubble Space Telescope, the researchers explain in their paper, but Postman told Motherboard that New Horizons is an even better tool for making these calculations because it is further away from solar objects (like light bouncing off planets in our solar system) than any other telescope equipped spacecraft.

Similar to how stargazing is easier in the countryside than in the city due to a lack of light pollution, New Horizons has a better chance at really seeing into the darkness than even Hubble does.

And better yet, Postman says, the researchers didn’t have to make any new measurements themselves. They were able to repurpose images already taken by New Horizons and simply use them for a new purpose.

Using existing datasets that estimated the number of bright objects in New Horizons’ field of view, the team added up the total amount of light they expected to see from the spacecraft. But when subtracting this number from how much light New Horizons was actually seeing, they found even more.

Postman explained that this mysterious cosmic glow could be the remnants of long-dead and far away stars or even evidence of something more exotic, like the collision and “annihilation” of dark matter particles.

It’s still too soon to say anything definite about what these remnants of light might actually be, said Postman, but there are exciting opportunities on the horizon to further confirm these results, including using the James Webb Space telescope to take extremely deep and dark pictures of space.

“[Then we can] see if indeed we find more galaxies than we had previously expected,” said Postman.