Archives
« Obi-Wan Kenobi Disney+ series is only going to be one standalone season. Fuck yeah, keep it tight and focused!
‘The Mandalorian’ Season 2 Trailer: Wherever I Go, He Goes. » 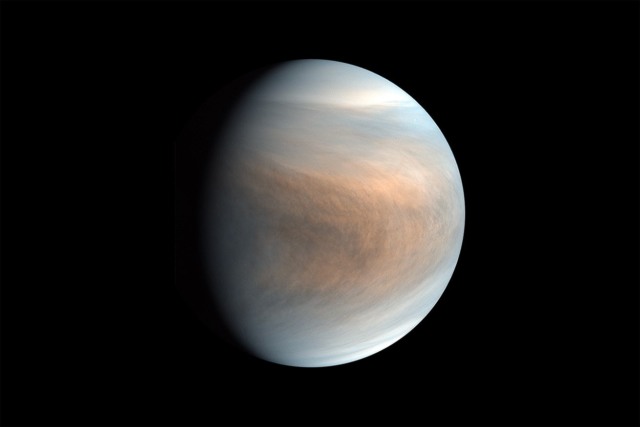 Hell yeah! There are signs of a possible presence of life on Venus. Now, we should probably pay attention to the word “possible”, right? I agree. But it’s still fun to get excited. I mean, no?

Scientists have detected tantalizing traces of a gas on Venus that may indicate the presence of alien life in its clouds, according to a bombshell study published on Monday in Nature Astronomy.

This discovery of phosphine, a compound produced by some lifeforms on Earth, is “not robust evidence for life” on Venus, emphasized researchers led by Jane Greaves, an astronomer at Cardiff University.

However, there’s currently no abiotic explanation for the presence of the gas, which means a biotic origin cannot be ruled out at this point.

The presence of phosphine remains “unexplained after exhaustive study” that yielded “no currently known abiotic production routes” in Venus’s atmosphere, clouds, surface, or subsurface, Greaves and her colleagues said in the study.

“Phosphine could originate from unknown photochemistry or geochemistry, or, by analogy with biological production of phosphine on Earth, from the presence of life,” the team added.

Venus is notoriously inhospitable to life on its surface, which is a hellscape of nightmarish proportions. But the environment in the Venusian skies, about 30 to 40 miles above its tortured landscape, is far friendlier, and has been characterized as relatively Earthlike.

For decades, scientists have viewed the complex and mysterious clouds of Venus as a potential habitat for alien life, as well as an excellent testbed for calibrating measurements of exoplanets, which are worlds that orbit other stars.

In keeping with that tradition, Greaves and her colleagues set out to examine Venus in order to establish possible parameters for identifying signs of life, known as biosignatures. The team chose to scan for phosphine, which is produced by both human and microbial activity on Earth, and is thought to be a promising biosignature to search for on exoplanets, according to a 2020 paper in Astrobiology.

The researchers did not anticipate that they would actually sniff out the gas on Venus. Nonetheless, observations with the Atacama Large Millimetre/submillimetre Array (ALMA) and James Clerk Maxwell Telescope (JCMT) in Hawaii revealed the spectral fingerprints of phosphine, at about 20 parts-per-billion.

“The aim was a benchmark for future developments, but unexpectedly, our initial observations suggested a detectable amount of Venusian phosphine was present,” they report in the study.

Puzzled by the detection, Greaves and her colleagues simulated possible sources of the gas that might arise on Venus without any help from life, including photochemical reactions, weather events like lightning, or outside contributions from meteorites. The team concluded that none of those scenarios adequately explain the presence of the compound on Venus.

Of course, that doesn’t mean that there are alien beasties thriving in the skies above Venus. Venus is woefully unexplored compared to the Moon and Mars, leaving scientists with huge knowledge deficits about its intricate natural processes.

“There are substantial conceptual problems for the idea of life in Venus’s clouds—the environment is extremely dehydrating as well as hyperacidic,” Greaves and her colleagues said.

“[T]o determine whether there is life in the clouds of Venus, substantial modelling and experimentation will be important,” they concluded.

We also might want to think about sending more probes to Venus, especially spacecraft that can scoop up samples of these juicy clouds to return to Earth. Three new missions launched to Mars this summer, including NASA’s life-hunting rover, but Venus may have just as strong a claim to habitability as the red planet.