Archives
« ‘Cowboy Bebop’ soundtrack is coming to vinyl this September. 3, 2, 1, let’s hipster!
Ancient Mars was covered in ice sheets, not flowing rivers. Back to the drawing board, folks! » 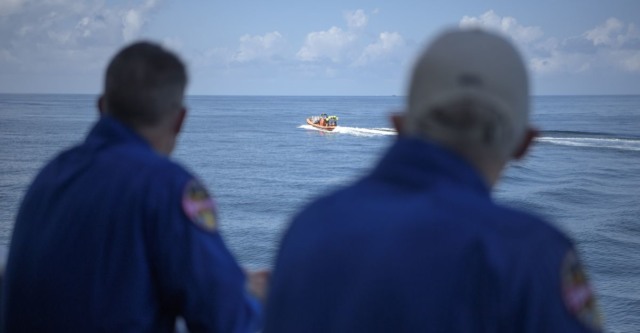 NASA astronauts Bob Behnken and Doug Hurley safely returned to Earth inside SpaceX’s Crew Dragon capsule this afternoon, bringing their historic two-month mission at the International Space Station to an end. The spacecraft carrying the two astronauts splashed down in the Gulf of Mexico off the coast of Pensacola, Florida at 2:48PM ET, where recovery boats were waiting nearby to receive the crew.

With this landing, the Crew Dragon has now successfully completed its first-ever passenger flight to orbit. The mission began on May 30th, when Behnken and Hurley both launched inside the capsule from Cape Canaveral, Florida and then docked with the space station a day later. Called Demon-2 or DM-2, the mission was meant to prove out all of the Crew Dragon’s biggest capabilities — by safely transporting people to space and getting them to the ISS. Now SpaceX has proved that the capsule can safely bring people home, too.

The mission isn’t quite over yet, as SpaceX recovery boats filled with teams of people are working to hoist the Crew Dragon out of the water. Then Behnken and Hurley can exit the capsule and breathe fresh air again. But the riskiest part of the landing is complete, and that ultimately paves the way for Crew Dragon to start regularly carrying astronauts to space in the future. SpaceX developed the Crew Dragon as part of NASA’s Commercial Crew Program, an initiative that tasked private companies with creating commercial vehicles to ferry the agency’s astronauts to orbit. Behnken and Hurley’s flight was the final test for the capsule as part of that program, and now, SpaceX is already preparing to fly the Crew Dragon again with people — once in September and again in spring of 2021.

As SpaceX takes up the mantle of launching astronauts, NASA is now entering a new era of human spaceflight, one where private companies are the ones regularly flying people to low Earth orbit. For nearly all of NASA’s history, the space agency had always been the one in charge of developing the spacecraft that took NASA astronauts to space. But thanks to the Commercial Crew Program, Behnken and Hurley’s flight marked the first time people had ever launched to orbit on a privately developed spacecraft.

Their flight also effectively returned NASA’s human spaceflight program back to the United States. Ever since the final flight of the Space Shuttle in 2011, NASA has had to rely on Russia’s Soyuz rocket to get the agency’s astronauts to the space station. It was the only option that NASA had, and it was a costly one. Each seat on the Soyuz ran NASA roughly $80 million. Now, NASA can launch its astronauts on the Crew Dragon, which takes off from Florida and costs about $55 million per seat.

To commemorate the return of US human spaceflight to American soil, Behnken and Hurley have brought back with them a very special piece of cargo from the ISS: a small American flag. The flag has been on the space station for the last nine years, left there by the last Space Shuttle crew in 2011, which actually included Hurley. The Shuttle crew commanded that the flag could be retrieved only by the next crew of astronauts who launched from the US, sparking perhaps the most epic game of Capture the Flag — with respect to time and distance. The flag has traveled more than 27 million miles during its time in orbit, according to NASA.

But now it’s back on Earth, along with Behnken and Hurley, who undocked from the space station with the flag yesterday evening. The two then spent 18 hours in orbit inside the Crew Dragon, slowly distancing from the space station. Just before 2PM ET, the Crew Dragon’s thrusters ignited, taking the capsule out of orbit and setting it on course for Earth. The capsule then plunged through Earth’s atmosphere, experiencing intense heating that reached up to 3,500 degrees Fahrenheit. After reaching a certain altitude, the Crew Dragon deployed a series of parachutes to help slow its fall and touch down gently in the ocean.

Their landing marked the first time since the Apollo program that NASA astronauts splashed down in the ocean when returning from space. It’s also the first spacecraft landing to take place in the Gulf of Mexico. NASA and SpaceX would have preferred for the astronauts to touch down on the east side of Florida near Cape Canaveral, but Tropical Storm Isaias forced the Crew Dragon to land near Pensacola — one of seven potential landing sites for the capsule around Florida.

Landing in water is not necessarily the nicest experience, as the motion of the waves can be a little nauseating after performing an intense plunge through Earth’s atmosphere. Plus, most astronauts have to adjust to Earth’s gravity after being in space for a long period of time, where their bodily fluids have shifted around and their sense of balance has been thrown out of whack. Fortunately, there is appropriate “hardware” on Crew Dragon in case Behnken and Hurley get sick. “Just like on an airliner, there are bags, if you need them,” Hurley said ahead of the landing during a press conference. “And we’ll have those handy; we’ll probably have some towels handy as well. And, you know, if that needs to happen, it certainly wouldn’t be the first time that that’s happened in a space vehicle.”

NASA expects it to take an hour after splashdown for Behnken and Hurley to be out of Crew Dragon and on the deck of SpaceX’s main recovery vessel. They’ll be greeted by NASA personnel, doctors, nurses, and other medical professionals, who will assess the crew and make sure they’re okay. Once given the all clear, the astronauts will then take a helicopter from a helipad on the boat to Pensacola. There, they’ll board a Gulfstream jet that will take them back to Houston, where their families will be waiting for them. Behnken and Hurley each have a son, and the two boys recorded a wake-up message for the astronauts this morning, telling their dads how eager they are to see them. And the astronauts are also eager to see their boys.

“I think for me, and probably for Doug as well, I think we’re really excited to see our families,” Behnken said prior to his return. “My son is 6 years old and I can tell from the videos that I get and talking to him on the phone that he’s changed a lot even in the just couple months that we’ve been up here.”

Once Behnken and Hurley are out of the Crew Dragon, the capsule will be checked out on the boat and then returned to one of SpaceX’s facilities in Florida. That’s where it will undergo refurbishment, so that it can fly again on its next mission: SpaceX’s third crewed flight of the Crew Dragon in spring of 2021. That flight will carry a crew of four astronauts to the space station, including Behnken’s wife, NASA astronaut Megan McArthur. McArthur flew to space once before on the Space Shuttle to help repair the Hubble Space Telescope. Now she’ll be flying on an entirely new vehicle and living on the space station for the first time.

“Of course I’ll have a lot of tips for her,” Behnken said. “A lot of them will be about how life on space station goes. I think that’s been the thing that’s been more unique, rather than the capsule itself. I think that’s probably where I’ll have the most to share with her, but I definitely have some advice about living inside of Dragon.”