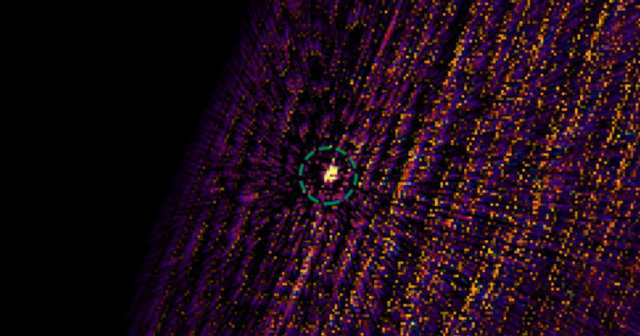 The “photobombing” black hole was picked up by the spacecraft’s Regolith X-Ray Imaging Spectrometer (REXIS), an instrument built by researchers at MIT and Harvard to measure X-rays that the asteroid Bennu emits when blasted by solar radiation.

Sample Platter
OSIRIS -REx is an ongoing sample-return mission to Bennu, a space rock chosen by scientists because it is suspected to hold organic molecules and could reveal other secrets about the origin of our Solar System. The mission launched in 2016 and rendezvoused with the asteroid in December 2018.

But last November, the REXIS instrument caught an unusual sight.

“Our initial checks showed no previously cataloged object in that position in space,” Branden Allen, a Harvard research scientist who made the discovery, said in a statement.

X-Ray Outburst
With the help of data collected by Japan’s MAXI telescope on board the International Space Station a week earlier, the team identified the glowing dot as an X-ray event involving a black hole — a sudden outburst of X-rays caused by a black hole gobbling up matter.

According to NASA, it’s the first time such an outburst of X-rays was detected from interplanetary space.