Archives
« Christian Bale in talks to join ‘Thor: Love and Thunder’ and man oh man would this rock
Rian Johnson is working on ‘Knives Out 2’ so maybe we can actually have nice fucking things! »

Some astronomers believe Jupiter is flinging comets into the solar system. Not stopping them. What the fuck, bro! 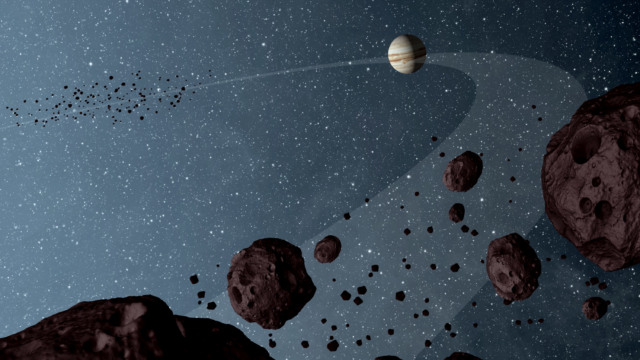 Jupiter! For years, I operated under the idea that it protected the Earth from comets. That was the consensus! Fuck! However, some astronomers now believe it may be doing the exact opposite.

Some astronomers believe that Jupiter, instead of protecting Earth from dangerous comets and asteroids, is actively flinging objects into the inner solar system. New research now demonstrates this complex process in action.

A popular theory suggests Jupiter, with its tremendous mass, acts like a gigantic shield in space, sucking in or deflecting dangerous debris left over from the formation of the solar system. That makes sense, but the Jupiter Shield theory, as it’s known, has been falling out of favor over the past two decades.

A leading critic of this theory, Kevin Grazier, formerly of the West Point U.S. Military Academy and NASA, has sought to debunk this idea for years. He has published several studies on the subject, including a 2008 paper titled, “Jupiter as a Sniper Rather Than a Shield.” Indeed, with each successive paper, Grazier has increasingly demonstrated the ways in which Jupiter, instead of being our protector, is actually—though indirectly—a pernicious threat.

Grazier’s latest foray into the subject involves a pair of companion papers, one published in the Astronomical Journal in 2018 and the other in the Monthly Notices of the Royal Astronomical Journal in 2019. The first paper takes a look at the complex ways in which objects in the outer solar system are affected by the Jovian planets, namely Jupiter, Saturn, Neptune, and Uranus, while the second paper looks at a specific family of icy bodies and how they’re transformed by Jupiter into potentially deadly comets. Looking at the findings of the two papers, it seems the Jupiter Shield theory is in serious jeopardy.

“Actually, I wouldn’t say that it’s in jeopardy—I would say that it has been laid to rest.” Grazier told Gizmodo in an email. “Our simulations show that Jupiter is just as likely to send comets at Earth as deflect them away, and we’ve seen that in the real solar system.”

To be clear, this was a very good thing when the Earth was young, as comets and asteroids delivered the essential ingredients required for life. Today, however, these impacts are most certainly not good, as they could trigger mass extinctions similar to the one that extinguished non-avian dinosaurs some 66 million years ago.