Archives
« ‘Black Adam’ is dropping December, 2021. Look at this hilariously shit-ass poster The Rock shared to announce it!
Japan’s Hayabusa2 spacecraft is returning to Earth with asteroid samples! This is either wonderful, or terrifying. »

Curiosity Rover finds weird oxygen fluctuations on Mars. We’re on to you, Illuminati! 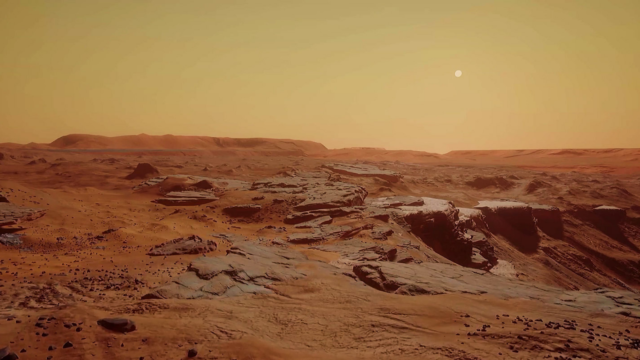 Ha! I knew the fucking Illuminati was hiding out on Mars. Now, it’s pretty much all but confirmed. Okay, okay, maybe not. But still. NASA’s Curiosity Rover has detected mysterious oxygen fluctuations on the Red Planet. Either way, it’s fucking awesome.

The Curiosity rover has already had a tremendously successful mission on Mars, but it’s not done making discoveries yet. NASA reports that the rover has detected a perplexing increase in oxygen concentrations on the red planet. While the cause is unclear, this comes just months after the rover detected a spike in methane, another biomarker gas.

Curiosity landed on Mars in Gale Crater more than seven years ago, and since then it has beamed back more data on the geology of the planet than scientists dared hope. The rover has discovered mineral deposits that point to water in the planet’s past, possible organic compounds, and numerous interesting geological features.

Earlier this year, NASA reported that Curiosity had spotted unusually high levels of methane in the planet’s atmosphere. This is notable because methane is considered a biomarker, something that life produces. Scientists are still probing what that means for Mars, but now oxygen levels are moving upward to unexpectedly high levels as well. As with methane, oxygen can indicate the presence of biological organisms, so it’s something Curiosity monitors.

The new oxygen data comes from the rover’s Sample Analysis at Mars (SAM) instrument, which the team uses to analyze the atmosphere as well as rock samples. Data from the last seven years shows that the air in Gale Crater is about 95 percent carbon dioxide with a smattering of nitrogen, argon, and just a touch of oxygen — 0.16 percent of it on average. There are seasonal patterns in the gas concentrations, but the new analysis shows that oxygen levels change much more than other gasses. During spring and summer, oxygen levels rise as much as 30 percent and then fall lower in winter. 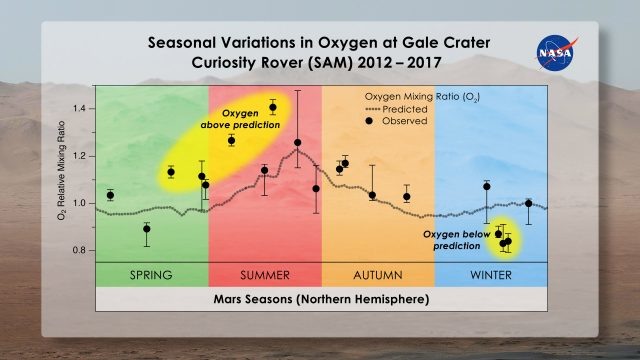 The team has investigated several possible explanations for the variation, but nothing quite covers all the observations. For example, more oxygen could appear from solar radiation splitting carbon dioxide or water molecules in the atmosphere, but there’s not enough water and carbon dioxide doesn’t split quickly enough.

Like the methane spikes, NASA is still investigating the oxygen swings. However, the team cautions against jumping to conclusions about the presence of alien microbes. It is more likely that some geological process is responsible for the changes in Mars’ atmosphere, and we might know more soon. The Mars 2020 rover will head to the red planet next year, and it will have a suite of sensors more suited to searching for evidence of life.