Archives
« Dudes get arrested after drilling through wall to steal 85 Bitcoin machines. The future is so fucking wild.
Weekend Open Bar: At Least The Stars Are Out »

India’s space agency wants to fucking explore Venus. I say, give me a hell yes! 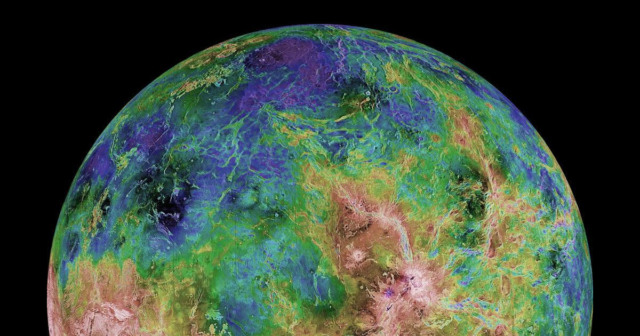 India’s space agency got its sights set on one hot fucking goal. Exploring Venus! Get it? Cause place is like, Hellish. Anyways, this fucking rules.

Scientists and engineers at the Indian Space Research Organisation (ISRO) have sent plans for a Venus orbiter to the Indian national government and are hoping they’ll get approval to go ahead with the mission. The spacecraft could launch in just a few years and would carry more than a dozen instruments.

“The major objective is to map the Venusian surface and subsurface,” Nigar Shaji, an ISRO scientist, told a group of Venus experts during a meeting held this week in Colorado.

According to Shaji, the Venus orbiter that ISRO is designing would be able to create such a dataset for Venus in about a year. In addition to mapping the surface itself, looking a bit deeper into the planet should help scientists identify volcanic hotspots scattered across Venus.

Instruments onboard the spacecraft would also study the planet’s atmosphere and ionosphere, as well as how Venus interacts with the surrounding environment, Shaji said. ISRO has identified 16 instruments from Indian scientists that it would like to fly. Those include instruments focused on monitoring clouds, identifying lightning strikes, studying the eerie airglow of the planet and measuring the highly charged plasma particles passing by Venus on their way out from the sun.

Another few instruments came from international partnerships. Three of those were proposed by U.S. scientists, but Shaji said ISRO understands that the funding for those instruments is not viable, so the agency is currently assuming the trio won’t fly.

If the mission is approved, the spacecraft could launch in June 2023 on one of ISRO’s Geosynchronous Satellite Launch Vehicles, the same type of vehicle that launched India’s Chandrayaan-2 mission to the moon this summer.

In India’s history of launches, that spacecraft followed its predecessor, which launched in 2009, and the Mars Orbiter Mission, which launched in 2013. ISRO has also discussed returning to the Red Planet, but preliminary timelines suggest that such a mission would likely launch after the Venus orbiter.