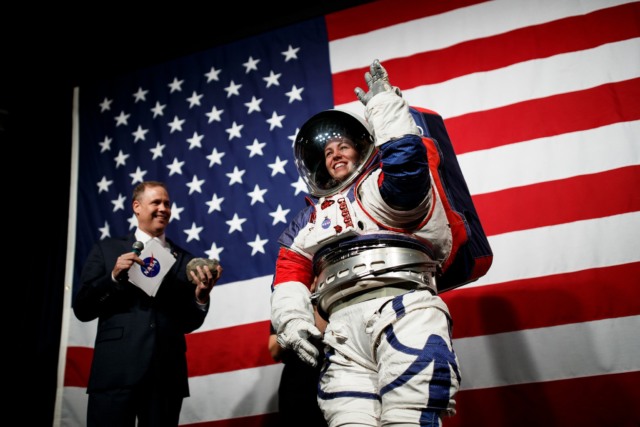 NASA has a mandate, folks. They need to get motherfuckers to the Moon by 2024. And perhaps obviously, a lot of shit is going into this. Including, but not limited to, spacesuits for the astronauts’ fleshbags. Spacesuits which the agency has given a look at.

NASA showed off new spaceflight suits and red, white and blue moonsuits Tuesday that astronauts will wear when launching into deep space aboard the agency’s Orion capsules and walking about on the moon during planned Artemis missions to the lunar south pole starting as early as 2024.

The next-generation suits will replace the bulky shuttle-era spacesuits currently used by spacewalking astronauts aboard the International Space Station, providing better comfort, improved mobility and greater flexibility while providing a safe haven in the vacuum, extreme temperatures and radiation while working on the dusty surface of the moon.

“These are our spacesuits for the Artemis generation,” NASA Administrator Jim Bridenstine said with a flourish as engineers wearing the new suits climbed onto a stage at NASA headquarters in Washington.

One suit, known at the Orion Crew Survival System, looks similar to the orange pressure suits space shuttle astronauts wore during launch and landing. But the new models feature a variety of improvements and are custom made for use aboard Orion capsules. The suits will be worn during launch atop NASA’s New Space Launch System, or SLS, heavy-lift rocket and during the capsule’s fiery plunge back into Earth’s atmosphere at the end of a mission.

The other new suit is designed for used on the surface of the moon. It carries a typical NASA name, the “Exploration Extravehicular Mobility Unit,” or xEMU. It will be pressurized between 4 and 8 pounds per square inch and carry enough oxygen for moonwalks lasting up to eight hours with a full hour held in reserve.

“We’ve been working for a long time to build space suits that will do the job on the moon and going on to Mars,” said Amy Ross, a senior spacesuit engineer and the daughter of veteran shuttle spacewalker Jerry Ross. “My job is to take a basketball, shape it like a human, keep them alive in a harsh environment and give them the mobility to do their job.”

As Ross said, the new suit will be pressurized at up to 8 pounds per square inch, roughly equivalent to a basketball. Even so, it features improved mobility thanks to bearings that let an astronaut move their arms to either side of their chest and even over their head, tasks impossible in the stiff suits currently used for spacewalks outside the International Space Station.

“We have a lot more mobility in the lower torso,” Ross said. “So you have a waist bearing and we have three bearings on the legs as well as a flexion extension joint at the waist. That gives (the astronaut) a lot of capability to move around and do whatever tasks we might need to do for science and maintenance on a planetary surface.”

Veteran astronaut Kate Rubins helped test the new suits in a huge water tank at the Johnson Space Center in Houston and she agreed they represent “a really big step up from the current suits we’re using on board the ISS.”

“There’s a huge difference,” she said. “The mobility is one of the biggest things, the fact that these bearings give you that great shoulder mobility, and that’s very important. … In addition, you can walk around in it. When we’re on ISS, the legs aren’t very useful during a spacewalk, we’re mostly just floating there.

“But obviously in the lunar environment, we’re going to need to walk around, and the more mobility you have, the more tasks you can get done, the more science you can accomplish, the farther you can go.”

Both new suits can accommodate a broader range of astronaut sizes than the suits currently aboard the space station, opening up moon flights to virtually anyone accepted in the astronaut corps.

“We … are building spacesuits that will fit all of our astronauts,” said Bridenstine. “We want every person who dreams of going into space to be able to say to themselves, yes, they have that opportunity. That’s what we’re working on right now.”

The Trump administration has endorsed a return to the moon by the end of 2024 when NASA plans to send the first woman and the next man to a landing near the lunar south pole.

The Artemis program will rely on SLS boosters and Orion capsules to carry astronauts to to lunar orbit where they will dock with a small space station known as Gateway. From there, crews will descend to the surface aboard a commercially-developed lander, carry out research and exploration and then return to the space station before heading back to Earth.

To reach the lunar surface by 2024, however, NASA must receive significant new funding, and it’s not yet clear how the agency will fare in upcoming congressional budget negotiations.