Archives
« Marvel Studios and Sony partnership on ‘Spider-Man’ movies is dead. This sucks so fucking much, dudes
‘Metal Gear Solid’ is getting a vinyl album. If one track isn’t someone yelling “Snake” it’s utterly fucking pointless » 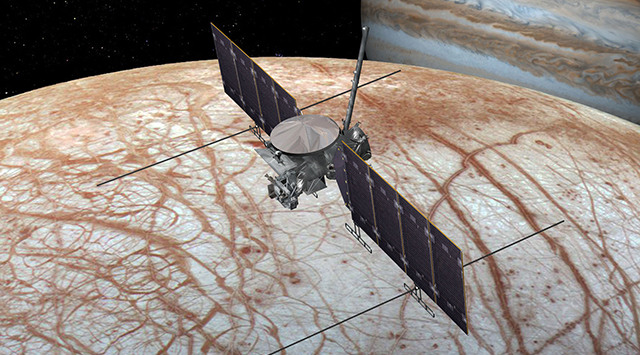 NASA has confirmed it’s going to Jupiter’s moon Europa, folks. Launching a sumbitch up into the Cosmos to hunt for life. Expected launch date? Somewhere between 2033 and 2035.

A Nasa mission to explore the most tantalising of Jupiter’s 79 moons has been given the green light to proceed to the final stages of development.

Europa – which is slightly smaller than our own moon – has long been considered a possible candidate in the hunt for alien life. Evidence suggests there is an ocean below the moon’s thick, icy crust that might be tens of miles deep. Scientists believe this body of water could contain the right chemical cocktail for life and could even be home to some form of living organisms.

Europa appears to have the hat-trick of conditions needed to kick off life: water, possibly chemistry, and energy in the form of tidal heating, a phenomenon arising from gravitational tugs acting on the moon. This could not only drive chemical reactions but also aid movement of chemical substances between rock, surface and ocean, possibly through hydrothermal vents.

It is proposed that the Nasa mission, named Europa Clipper, will make a number of close flybys – it cannot orbit the moon as Jupiter’s radiation belt would fry its electronics – carrying cameras and intruments to measure the moon’s magnetic field.

The mission will look for subsurface lakes and provide data on the thickness of the moon’s icy crust. The team also hope to confirm the presence of plumes of water, previously detected by Nasa’s Galileo spacecraft and the Hubble space telescope. If confirmed, it would mean scientists would not need to find a way of hacking through the moon’s icy crust to explore the makeup of the ocean.

Another discovery of water in space – how boring. We must search for alien life
Stuart Clark
Read more
The new announcement means the mission has now been given the go-ahead for the final design to be made, the spacecraft to be built and the instruments to be developed and tested.

“We are all excited about the decision that moves the Europa Clipper mission one key step closer to unlocking the mysteries of this ocean world,” said Thomas Zurbuchen, an associate administrator for the Science Mission Directorate at Nasa’s headquarters in Washington.