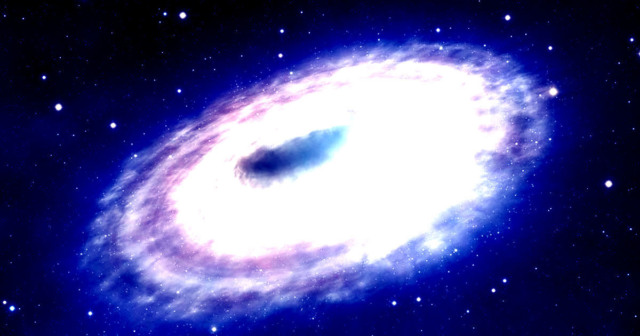 Recently, our Milky Way Galaxy’s supermassive black hole shone brighter than a motherfucker for two-hours. And, the reason for it? We got no idea. Which is half of the awesomeness.

The supermassive black hole at the heart of the Milky Way, Sagittarius A*, is relatively quiet. It’s not an active nucleus, spewing light and heat into the space around it; most of the time, the black hole’s activity is low key, with minimal fluctuations in its brightness.

Most of the time. Recently, astronomers caught it going absolutely bananas, suddenly growing 75 times brighter before subsiding back to normal levels. That’s the brightest we’ve ever seen Sgr A* in near-infrared wavelengths.

“I was pretty surprised at first and then very excited,” astronomer Tuan Do of the University of California Los Angeles told ScienceAlert.

“The black hole was so bright I at first mistook it for the star S0-2, because I had never seen Sgr A* that bright. Over the next few frames, though, it was clear the source was variable and had to be the black hole. I knew almost right away there was probably something interesting going on with the black hole.”

But what? That’s what astronomers are on a mission to find out. Their findings so far are currently in press with The Astrophysical Journal Letters.

Do and his team took observations of the galactic centre using the WM Keck Observatory in Hawaii over four nights earlier this year. The strange brightening took place on May 13, and the team managed to capture it in a timelapse, two hours condensed down to a few seconds.

That brightly glowing dot right at the beginning of the video is the dust and gas swirling around Sgr A*. Black holes themselves don’t emit any radiation that can be detected by our current instruments, but the stuff nearby does when the black hole’s gravitational forces generate immense friction, in turn producing radiation.

When we view that radiation with a telescope using the infrared range, it translates as brightness. Normally, the brightness of Sgr A* flickers a bit like a candle, varying from minutes to hours. But when the surroundings of a black hole flare that brightly, it’s a sign something may have gotten close enough to be grabbed by its gravity.

The first frame – taken right at the beginning of the observation – is the brightest, which means Sgr A* could have been even brighter before they started observing, Do said. But no one was aware that anything was drawing close enough to be swallowed by the black hole.

The team is busily gathering data to try and narrow it down, but there are two immediate possibilities. One is G2, an object thought to be a gas cloud that approached within 36 light-hours of Sgr A* in 2014. If it was a gas cloud, this proximity should have torn it to shreds, and parts of it devoured by the black hole – yet nothing happened.

The flyby was later called a “cosmic fizzle“, but the researchers believe the black hole’s May fireworks show may have been a delayed reaction.

But – have a look at the timelapse again. See that bright dot at around 11 o’clock from the black hole? That’s S0-2, a star on a long, looping, 16-year elliptical orbit around Sgr A*. Last year, it made its closest approach, coming within 17 light-hours of the black hole.

“One of the possibilities,” Do told ScienceAlert, “is that the star S0-2, when it passed close to the black hole last year, changed the way gas flows into the black hole, and so more gas is falling on it, leading it to become more variable.”

The only way to find out is having more data. They are currently being collected, across a larger range of wavelengths. More observations will take place over the coming weeks with the ground-based Keck Observatory before the galactic centre is no longer visible at night from Earth.

But many other telescopes – including Spitzer, Chandra, Swift and ALMA – were observing the galactic centre over the last few months, too. Their data could reveal different aspects of the physics of the change in brightness, and help us understand what Sgr A* is up to.

The paper has been accepted into The Astrophysical Journal Letters, and is available on arXiv.