Archives
« ‘Bill &Ted 3’ announces start of filming with a Wyld Behind-the-Scenes image. Get it?!
Monday Morning Commute: It’s supposed to be easier than this (promised no one) »

NASA’s TESS spacecraft has found its smallest exoplanet yet. But hey, finding a planet is dope regardless, right? 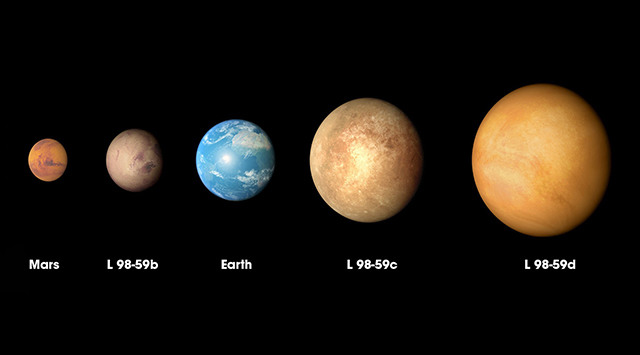 NASA’s TESS spacecraft has found its smallest exoplanet. It’s small as fuck! But, that ain’t the real bummer. What is? It’s outside of a hospitable zone. Still though, TESS. Good job, great effort.

NASA’s TESS spacecraft is continuing to find ever-smaller planets — and that now includes planets smaller than the human homeworld. The vessel has found a planet in the L 98-59 system, L 98-59b, that’s 80 percent the size of Earth — and 10 percent smaller than TESS’ previous tiniest finding. You won’t be planning a vacation any time soon, unfortunately. The system is 34.6 light-years away, and all of the planets discovered so far (there are larger 59c and 59d planets) sit in the “Venus zone” where a runaway greenhouse gas effect could render them uninhabitable.

TESS spotted the planets by using transits (regular dips in the star’s brightness caused by passing planets). You might get more information soon, at least. TESS completes its first year of studies in July, and that could be enough to both collect more detail about the known planets and possibly spot more.

This isn’t a record for NASA as a whole. Kepler-37b, for instance, is barely larger than the Moon. This shows that TESS can spot a wide range of exoplanets, though, and raises hope that it’ll detect rocky worlds that warrant closer study with the James Webb Space Telescope. This isn’t just about the quest to find extrasolar life, either. The data could help explain why planets either become habitable or devolve into Venus-like hellscapes.