Archives
« NASA’s TESS spacecraft has found its smallest exoplanet yet. But hey, finding a planet is dope regardless, right?
‘The Flash’ considering ‘It’ director Andy Muschietti to helm movie. Yeah, sure, okay, just start filming »

Monday Morning Commute: It’s supposed to be easier than this (promised no one) 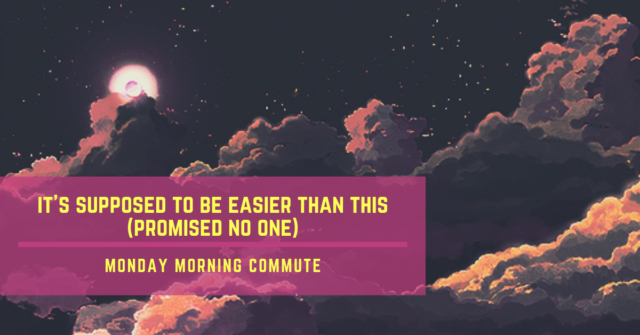 I know that I haven’t written a Monday Morning Commute in a hot minute, and if truth be told, I don’t want to be writing one now! Hey, how’s that for a hello! But, I gotta admit. It’s just tough to get the juice needed to spin one. However what I know is this: for every week a skip, it becomes more difficult. So here I am, friends. Every once in a while I wax nostalgic here, a bit lachrymal. Despite closing in on a solid fucking decade of OL this August (I say goddamn!), there’s always a bit of me that misses the old days.

What can ya do, nothing gold can stuff. And, if gold can’t stay, imagine the lasting power of this shambling space-ship in the middle of Oblivion.

So even though these posts feel more like Captain’s Logs chronicling the end-run of blog entropy rather than a communal experience these days, I’m here! And this is what I’m digging and anticipating this week.

Gaming adventures as of late:

Bateman and I beat Dead Cells, and I miss it. I personally beat Devil May Cry 5, and I miss it. Truth be told, I’m trying and failing to get into The Witcher 3. I think that, you know what, that sort of fantasy really isn’t my bag. However, I’m really digging Katana Zero as of late, and the free Borderlands 2 DLC that bridges the second and third titles? Fucking fantastic. I’m strongly considering picking up Hollow Knight. Give me all the fucking Metroidvania, gameplay-heavy sidescrollers. Please and thank you.

Seeing both Midsommar and Far From Home this week. They couldn’t be further from each other, but I’m stoked for each of them for different reasons. I recently saw The Night of the Comet and it’s a wonderful fever dream of 1980s..horror? Camp? Something? Caught Karate Kid, and it’s actually a good movie. Was surprised there. Kindergarten Cop? What a fucking delirious, patchwork movie. Makes absolutely no sense. You’ve probably forgotten how bad the majority of the movie is, outside of the Arnold Teaching scenes.

Not exactly an album to recommend, but Rendar, Bateman, and I went to an FM-84 concert a couple of weeks ago. And, let me tell you. That shit ripped. Really enjoying a single by Neon Nox titled Assassination. The new Chon album isn’t revelatory, but it is enjoyable. Obsessed with a GoldLink single from 2017 called “Same Clothes” — like really bumping the fuck out of it. Meanwhile, Street Cleaner’s album Payback 2 is all the slashwave I need.

I Think You Should Leave is the best sketch comedy show I’ve watched in years. It’s only six episodes, and they’re only like seventeen minutes a pop. So if sketch comedy is your jam, hop on this shit. As well, once again trying to finish The Leftovers. I really enjoy it, I just fall off. Also, The Expanse may be my favorite show on TV.

Despite my bitching and moaning about the slow heat-death of OL, life is pretty good. Stoked to celebrate the Fourth of July at Rendar’s on Thursday. Yoga still clarifies. Teaching is both fantastic and draining. Teaching two classes Monday through Thursday, each two-hours long is a lot. Yeah, it’s moseying along. Can’t complain, can’t complain. Hope you’re doing well, too.

So tell me, how are you? What are you up to, friends?