Archives
« ‘Episode IX’ wraps shooting and J.J. Abrams announces it with cast photo. I got all the damn feels, dudes
‘Bond 25’ has been delayed two months as Scott Z. Burns comes onboard to rewrite script »

Marvel’s ‘Loki’ TV series lands ‘Rick and Morty’ writer as its goddamn showrunner. Man, this is gonna be good, ain’t it? 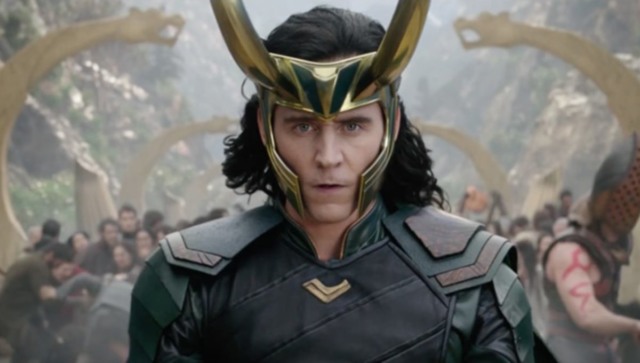 I really, really want to not give a fuck about the Marvel shows heading to Disney’s streaming service. But, the motherfuckers don’t fight fair! I mean, a Rick and Morty writer as the showrunner? Fuck.

The god of mischief deserves a writer who knows a thing or two about crafting finely-honed chaos…and it sounds like Disney’s upcoming Loki TV series is in good hands. Michael Waldron, a writer for the anarchic and ambitious animated series Rick and Morty, has been hired to serve as showrunner on the new streaming series. Sounds like a match made in Asgard.

The Hollywood Reporter has the story, reporting that Waldron (who worked on the upcoming season of Rick and Morty) will write the pilot and act as showrunner. Not other talent has been announced or revealed, but it’s expected that Tom Hiddleston will reprise the role that made him a star across three Thor movies and two Avengers adventures.

If you’re wondering how he could do this when Loki was (spoilers for Avengers: Infinity War) killed by Thanos and left to explode on a ruined spaceship…well, it sounds like the new show will take place across time, seemingly before the events of the Marvel Cinematic Universe. According to THR:

Sources say the show will follow Loki as the trickster and shapeshifter pops up throughout human history as unlikely influencer on historical events.

This is a very interesting approach, as it allows Loki to remain dead and for his demise to continue to carry weight and haunt Thor while also letting us enjoy Hiddleston doing what he does best. Honestly, the thought of his Loki pulling a reverse-Quantum Leap and influencing past events for his own pleasures and whims (rather than, you know, because it’s the right thing to do) sounds like a blast.

Plus, the blend of the fantastical and the historical sounds right up the alley for someone who worked on Rick and Morty, a series that perfectly blends big science fiction concepts with brilliant scatological humor. Loki is a trickster god, so a comedy writer like Waldron feels perfectly suited to steer the character on a wild romp through time and space. His other credits are a bit slim, but it’s exciting to see Disney taking a big chance on a clearly talented, albeit untested, writer.

Loki is one one of three Marvel shows coming to the new Disney+ streaming service. It will be joined by a series focusing on the super-powered couple Vision and Scarlet Witch as well as a team-up series following Bucky “The Winter Soldier” Barnes and Sam “the Falcon” Wilson. None of these shows have release dates yet, but you can expect at least one or two of them to arrive at some point this year to convince folks that Disney+ is the real deal.