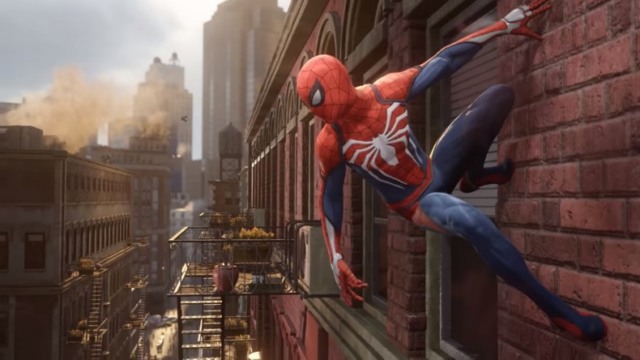 Hey! A fucking spider-pun! To announce the web-crawler swinging (there it is again, lol~) onto the PS4 this Fall.

Insomniac Games’ Spider-Man will launch on Sept. 7, 2018, the studio announced. The news comes out of the cover story from this month’s issue of Game Informer magazine, which offers plenty of other new details about the game.

The release date makes Spider-Man one of PlayStation 4’s big tentpoles this fall. The console exclusive is also the first Spider-Man game in years; although it’s not related to 2017’s excellent Spider-Man: Homecoming film, the new release certainly capitalizes on the reinvigorated interest in one of Marvel’s most beloved heroes.

Also detailed in Game Informer are various details about the open-world action game’s missions, combat and crafting options. There are also, of course, side quests to check out — hopefully including some pizza delivery or photography assignments. Sure, this Spider-Man game looks a bit more serious than classics like Spider-Man 2, but Peter Parker’s alter ego is nothing if not down to clown.

Update: Insomniac Games also announced on the PlayStation Blog that the game will receive downloadable content, “The City Never Sleeps,” following release. The three-chapter series will include additional villains, quests and Spidey suits. Buyers of the game’s digital deluxe edition will receive the content as part of their purchase; Insomniac hasn’t revealed a release date for other buyers.

There will also be bonus content offered to those who pre-order either of the special edition versions of the game, like a pack of mystery Spidey suits, a PlayStaiton Network theme and avatar, and a Spider-Drone gadget. There’s also a pin thrown in there too.