SpaceX Planning To Send Two People Around The Moon Next Year 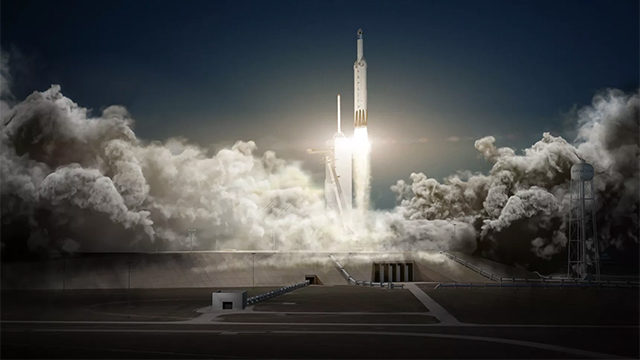 SpaceX has been approached by two obviously rich as fuck private citizens, who want to be sent around the Moon. And! The good, kind, cosmos-capitalist company has agreed, with plans slated for next year.

It will be a private mission with two paying customers, not NASA astronauts, who approached the company. The passengers are “very serious” about the trip and have already paid a “significant deposit,” according to Musk. The trip around the Moon would take approximately one week: it would skim the surface of the Moon, go further out into deep space, and loop back to Earth — approximately 300,000 to 400,000 miles.

The plan is to do the trip in the second quarter of 2018 on the Crew Dragon spacecraft with the Falcon Heavy rocket, which is due to do its maiden launch this summer. Of course, Musk is well-known for his unrealistic deadlines — in 2011, he promised to put people in space in just three years.

The two people going on the trip, who weren’t named, already know each other. They will begin initial training for the trip later this year. Musk declined to comment on the exact cost of the trip, but said it was “comparable” or a little more than the cost of a crewed mission to the International Space Station. For context, one ticket on the Russian Soyuz rocket costs NASA around $80 million.

Musk believes these private missions could be a “significant driver of revenue” for the company and expects to have at least one or two a year, possibly making up 10 to 20 percent of SpaceX revenue.

A permit from the United Nations will not be necessary, according to Musk, though the trip will need to be licensed by the Federal Aviation Administration.

The Crew Dragon, which hasn’t yet flown, is an automated vehicle; the system will operate autonomously for most of the flight. If there is an emergency, the passengers will need to probably step in, but “the success rate is quite high,” says Musk. There will be changes to the Dragon’s communication system, mostly to allow deep space communication.

The company expects to fly an uncrewed Crew Dragon with Falcon 9 to ISS by the end of this year. There will be another mission six months later with a NASA crew. Six months after that, if all goes as planned, is when the two people would fly around the Moon. These paying customers “are entering this with their eyes open, knowing that there is some risk here,” says Musk. “We’re doing everything we can to minimize that risk but it’s not zero.”

SpaceX has already been developing the Crew Dragon to carry people for NASA, as part of the agency’s Commercial Crew Program. It’s an initiative that tasks two private companies — SpaceX and Boeing — with developing vehicles that can carry people to and from the International Space Station.

SpaceX’s target date for the first official crewed mission is supposed to take place in 2018. But a recent report from the Government Accountability Office suggested that the company’s vehicles may not be certified until 2019. Musk has tweeted that, despite the report, SpaceX will be ready.

It might pay to be skeptical, though. SpaceX initially promised to begin ferrying astronauts to the ISS by 2017 as part of NASA’s commercial crew program. That date is clearly no longer on the table. Also, in 2011, Musk told The Wall Street Journal that his best-case scenario was to put people on Mars by 2021 (his worst-case scenario was between 2026 and 2031). Last year, he said he was planning to put people on Mars as early as 2024. So the target of 2018 should perhaps be taken with a grain of salt.

And the delay might actually come from NASA. If NASA decides they want to do the first lunar mission, NASA would have priority. For its part, SpaceX expects to do more than one Moon mission. Other flight teams have already expressed interest in going on future trips.

“Next year is going to be the big year for carrying people,” says Musk. “This should be a really exciting mission that hopefully gets the world really exciting about sending people into deep space again.”

Tags: NASA, Space, SpaceX, The Moon, trip around the moon