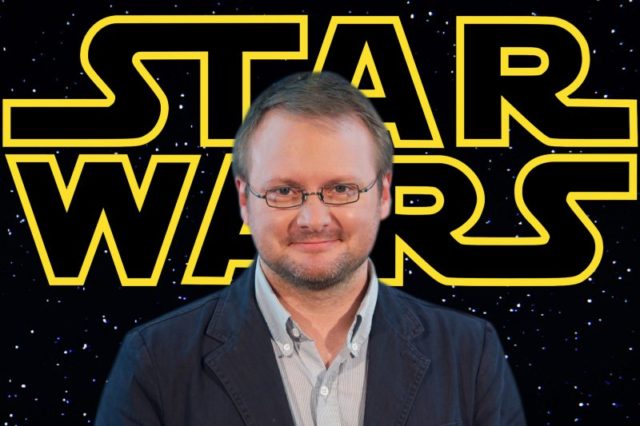 We hungry out here! Hungry for some fucking Episode VIII news. Starving. So yeah, we’re going to eat up this fucking non-news. Did you know that Episode VIII is going to be “funny” and “a ride”? No? Yes? Either case! Gobble gobble, fellow Star Wars slobs.

If there was just a new Rian Johnson movie coming out in less than twelve months, I’d be on pins and needles. But we’re getting a Star Wars movie directed by Rian Johnson and there are few things as promising as that combination of nouns. But as is the norm with any new Star Wars movie, every detail about Star Wars: Episode 8 is currently under lock and key…which means that this interview with Johnson features him merely hinting at what we can expect to see from upcoming sequel. Which totally has a title, by the way. He just won’t tell us.

The interview is with USA Today and it serves as a follow-up to their precious discussion about the film’s plot. The headline-friendly tidbit here is that Episode 8 has had a title since since the first draft of the screenplay and that he just hasn’t been allowed to share it yet, but there’s so much more to sink our teeth into. Like Johnson talking about making sure his Star Wars movie is fun:

The creative work has felt like play. It’s felt resonant and meaningful because it meant so much to me as a kid… I want [Episode VIII] to be a blast and to be funny and to be a ride the way The Force Awakens and the original Star Wars movies were.

Previous reports have suggested that Episode 8 will be a darker movie than its predecessor, which makes sense. The middle chapter of any trilogy tends to involve the lead characters being tossed in a deep, dangerous pit without any obvious hope of escape. While The Empire Strikes Back is the go-to example of the “dark” sequel, it manages to blend those harsher elements with a genuine sense of adventure. It’s a tricky balance, but one that I expect the director of Brick and Looper to understand.

Speaking of tossing characters into deep, dangerous pits, Johnson also spoke about further exploring the characters introduced in Star Wars: The Force Awakens by pushing them to their limits:

I wanted to know more about each of them, and that doesn’t just mean information or backstory… Figure out what’s the most difficult thing each of them could be challenged with now — let’s throw that at them and dig into what really makes them tick by seeing how they handle that.

But of course, Mark Hamill’s Luke Skywalker, now a hermit living on the isolated planet of Ahch-to, will play a major role alongside those youngsters:

[Luke’s story is the] emotional entry point [of the movie]. I’m approaching [his story] with a take that I hope feels honest and real and is going to be interesting to folks and make sense.

This is the portion of the film I can’t help but be most curious about. The original trilogy tracked Luke’s rise from simple farm boy to Jedi Knight, a hero’s journey that concluded with him at the height of his powers. And then, everything fell apart. His chief student turned on him. His new Jedi school was destroyed. Rather than stick around and try to pick up the pieces, our hero fled to live in isolation. That’s not what we’d expect the Luke we saw in the original trilogy to do and I’m eager to see the fallout of the past 30 years has changed him.