Archives
« JMS’ comic ‘Rising Stars’ optioned for movie by MGM
‘Justice League’ Official Logo and Plot Details! For You Three Who Are Optimistic! » 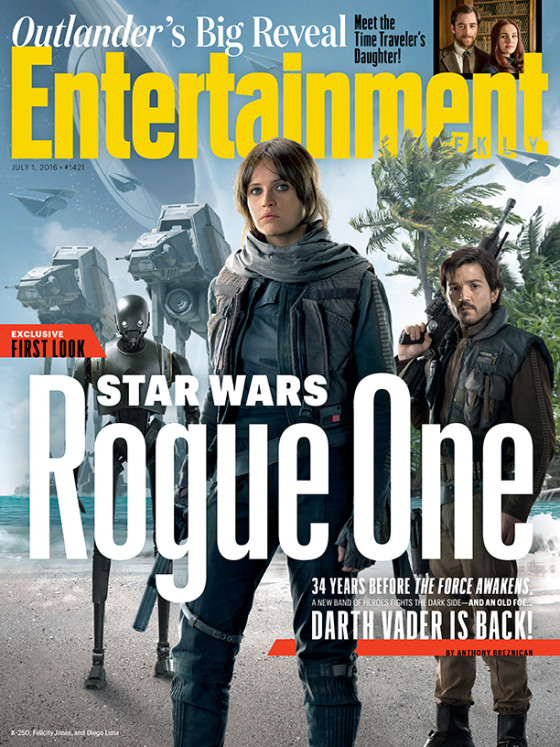 Entertainment Weekly has released new details on the cast of Rogue One: A Star Wars Story, out this December. Among the round-up are the names and bios of several characters, including confirmation that protagonist Jyn Erso is the latest Star Wars hero with dad problems.

A leaked story guide last month revealed several of these names, but Entertainment Weekly both confirms and expounds upon the characters. Here’s the latest on who’s who in Rogue One:

Jyn Erso (Felicity Jones): Living independently since she was 15, Jyn’s “got a checkered past,” according to producer Kathleen Kennedy. At the start of the film, she’ll be serving a sentence with the Rebellion.

Galen Erso (Mads Mikkelsen): The actor previously hinted that he’d be playing the father of Jyn, and Entertainment Weekly says that the pair are estranged. Galen is all-knowing and desperately wanted by the Empire and the Rebellion. Lucasfilm is keeping his official look under wraps.

Director Orson Krennic (Ben Mendelsohn): This Imperial leader is after the Rebels, but he’s also hoping to avoid the wrath of his boss, Darth Vader. Instead, he’s hoping to keep the Emperor happy.

Chirrut Imwe (Donnie Yen): He’s not quite a Jedi, although the warrior monk shares many of their spiritual qualities. He’s also blind, but that hasn’t stopped him from becoming a force to be reckoned with.

Bodhi Rook (Riz Ahmed): He’s the lead pilot of the squad at the center of the film. He’s both technical and volatile.

K-2S0 (Alan Tudyk): He’s the opposite of C-3P0, director Gareth Edwards said. Nicknamed “Kaytoo,” he’s not here to make friends with humans, but to redeem his own sordid past.

Forrest Whitaker‘s character remains without a name, but Entertainment Weekly hints that true Star Wars fans will recognize it once it’s announced. More will be revealed soon — later today, in fact. We’ll have more once the truth is out.

Meet the Rebel fighter who’s so extreme that the other good guys aren’t sure if he really is one.

Forest Whitaker’s character has been one of the more closely held secrets of Rogue One: A Star Wars Story, but Lucasfilm is ready now to make his identity official: this shadowy freedom-fighter is Saw Gerrera, a figure with a surprisingly deep background in galactic history.

The warrior — seen in the Rogue One trailer asking, “If you continue to fight, what will you become?” — was actually first seen in season 5 of The Clone Wars animated series, when he was a young man on the planet Onderon, unleashing guerilla combat on the droid army of Separatists who took over his world.