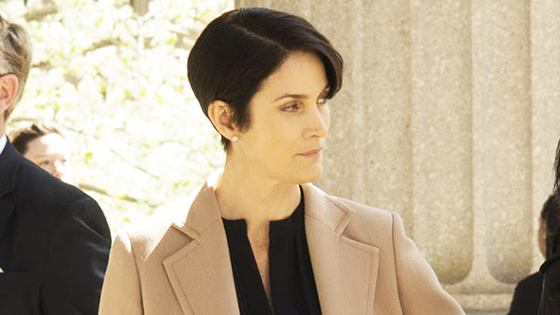 The upcoming Netflix series Iron Fist is lawyering up and you’ll definitely recognize the Jessica Jones import that will be joining the fray. Heck, you may have been expecting this arrival all along.

Marvel has revealed that Carrie-Anne Moss will be reprising her role of lawyer Jeri Hogarth for the new superhero action series. It’s a development that seemed inevitable considering the place Hogarth (a.k.a. Jeryn Hogarth in the comics) has in the Iron Fist story and it’s nice to have Carrie-Anne Moss in more things, so it’s a win all-around. It’s also the latest addition to an increasingly fleshed out cast that includes Game of Thrones alum Finn Jones as Danny Rand/Iron Fist.

The brass at Marvel have offered up a glowing endorsement of what Moss will bring to the table in the streaming series.

“Carrie-Anne has fast become a fan-favorite part of our street level saga, and we share our viewers’ excitement in bringing her into ‘Marvel’s Iron Fist,’” said Executive Producer/Head of Marvel Television, Jeph Loeb. “As Marvel fans know, Hogarth in the comics plays a critical role in the life of Danny Rand so it seems only fitting that Carrie-Anne join in.”

“Danny Rand lives in the highest stratosphere of New York’s business society and he’s going to need a ruthless lawyer to help him navigate this alien world,” said Executive Producer and Showrunner, Scott Buck. “I’m very happy to have the opportunity to bring Carrie-Ann Moss as Jeri Hogarth into ‘Marvel’s Iron Fist.’”

That all sounds very lovely and we look forward to seeing how it pans out when Iron Fist eventually springs onto Netflix. Speaking of which, things are getting increasingly crowded in the Marvel Cinematic Universe: TV Edition.Luke Cage is earmarked to debut as its own series on September 30, a second season of Jessica Jones is on the way, The Defenders is still on the horizon and there’s The Punisher looming in the distance. It might not feel like it between binges, but Netflix viewers are spoiled for future Marvel options. ABC viewers? Well, not so much.