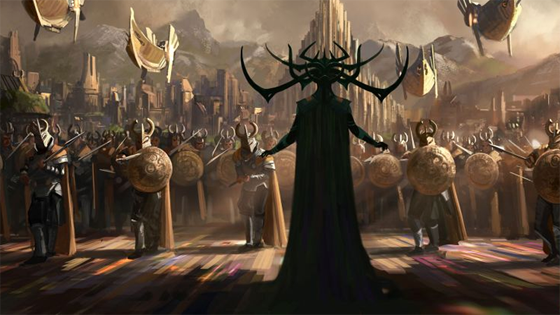 Thor 3 got itself a fucking silly-stacked cast. We already knew about Mark Ruffalo. We already knew about Tessa Thompson. We sort of knew about Cate Blanchett. But Goldblum and Urban, too? Marvel ain’t fucking around, and I imagine for good reason. As much as (my butt) and I worship the Odin-Son, his outings have been largely forgettable to the masses at large. Here is hoping the third installment’s as fantastic as its cast.

Tons and tons of rumors about the cast of the next Thor movie have been floating around for ages, but now Marvel has finally confirmed its cast list. While there’s a few expected faces on there, there’s one really big surprise: Holy Christ, Jeff Goldblum is in this movie.

The list confirms the long–running rumor that Cate Blanchett will play the film’s primary villain: Hela, the Asgardian Goddess of Death, seen in concept art from the movie above. Meanwhile, Jeff Goddamn Goldblum, who recently hinted that he’d be joining a superhero project, will play the Grandmaster—a cosmic character from the comics who is incredibly powerful,and uses said power to essentially dick about in the universe and play games (usually revolving around forcing people to fight against each other for his pleasure).

Mark Ruffalo will naturally reprise his role as the Hulk and Bruce Banner, while the cast is rounded out by Tessa Thompson, confirmed to play Asgardian superhero Valkyrie, and Karl Urban, who will play Skurge, a villainous Asgardian with an enchanted axe that was a long time rival of Thor. The new cast joins the returning Chris Hemsworth, Tom Hiddleston, and Sir Anthony Hopkins.