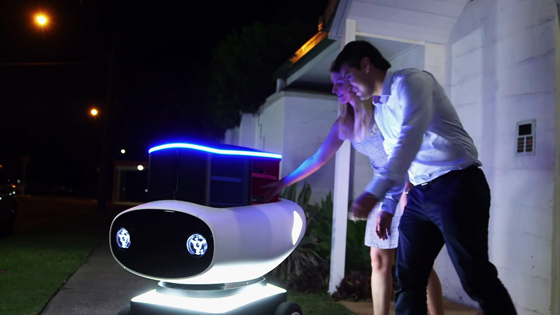 Nothing is going to scream post-apocalyptic RobotWasteland in a decade or so like your RobotPizzadeliveryMachine shooting you with its self-made laser cannon to kick off Their insurgency. I mean right?

Domino’s is bringing robotic pizza delivery to New Zealand. The pizza chain today announced that it will trial a battery-powered delivery robot in the capital city of Wellington, describing the bot as “the world’s first autonomous pizza delivery vehicle.”

Known as DRU (Domino’s Robotic Unit), the four-wheel robot was developed in Australia and is capable of completing deliveries within a 20-mile radius on a single charge. DRU stands at just under three-feet tall, and uses an array of sensors to avoid obstacles. Up to 10 pizzas can be stored in the bot’s heated compartment, which can be unlocked with a code that customers are given when they order.

DRU is the latest in a series of tech-centric campaigns from Domino’s. In 2014, the company created a Siri-like virtual assistant that customers can use to order pizza, and last year it began accepting text message orders with pizza emoji. Other companies have looked to develop robots for delivery as well, including Starship Technologies, which announced its own (very similar) autonomous bot at Mobile World Congress this year.

A start date for the Domino’s trial has not been announced, but New Zealand’s government is already very excited about it. “This is an exciting opportunity for New Zealand… over the last 12 months I’ve been actively and aggressively promoting New Zealand as a test bed for new transport technology trials,” Transport Minister Simon Bridges tells the AFP.