1) I cannot fucking wait. 2) It appears the show *is not* going “head to head” (our own Neo pointed out it really wouldn’t be much of a competition) with BatGuy vs SuperBrooder, dropping a week earlier.

Netflix and Marvel Television have followed up the debut of the new teaser for “Daredevil”Season 2 with the release of a poster based on the art used in the trailer.

While Matt Murdock remains at the center of the piece, the true focus is the Punisher, whose presence is depicted through the use of smoke and shadows forming the antihero’s iconic skull emblem.The official synopsis for “Daredevil’s” second season, which debuts March 18, is as follows:

Just when Matt thinks he is bringing order back to the city, new forces are rising in Hell’s Kitchen. Now the Man Without Fear must take on a new adversary in Frank Castle and face an old flame – Elektra Natchios.Bigger problems emerge when Frank Castle, a man looking for vengeance, is reborn as The Punisher, a man who takes justice into his own hands in Matt’s neighborhood. Meanwhile, Matt must balance his duty to his community as a lawyer and his dangerous life as the Devil of Hell’s Kitchen, facing a life-altering choice that forces him to truly understand what it means to be a hero.

Charlie Cox, Deborah Ann Woll, Elden Henson and Rosario Dawson return for the second season of the acclaimed drama, joined by Jon Bernthal as The Punisher, Élodie Yung as Elektra and Stephen Rider as Blake Tower. 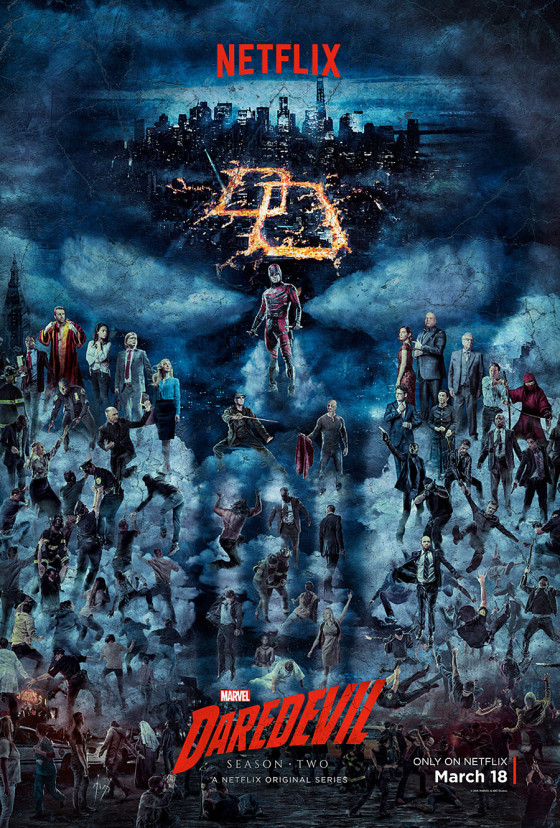