Archives
« Weekend Open Bar: You would *not* believe the deal we got on our digi-afterlife
Six New ‘Batman v Superman’ Images: Wayne Is Too Old For This Crap, GlareGlare Time, and More! » 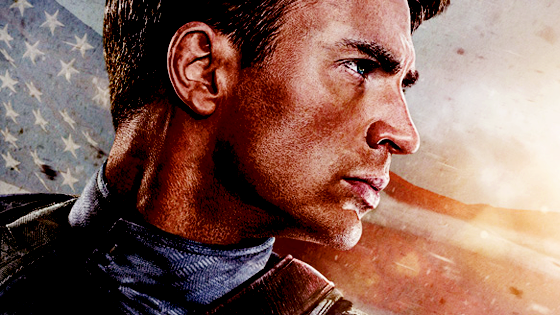 Appreciative babe is appreciative. I’m one to often understand an actor’s fatigue at playing a certain role, even if it means I accept their pending departure. However, there are also actors who seem openly derisive of the role that established them, only to look back fondly later on and realize how good they had it. (I’m staring you right in the fucking eyes, Fox Mulder.) So it’s pretty refreshing to see Chris Evans not only aware of how special his role in the MCU is, but also be willing to ride or die as Steve Rogers for as long as Marvel wants him.

Last year there were some rumblings that Chris Evans might be stepping away from acting, including his role as Captain America for Marvel Studios after he completed the final films in his current contract, the last being The Avengers: Infinity War – Part 2 in 2019. The actor wanted to focus more on directing, but he eventually pulled back on thoughts of retirement and wasn’t necessarily eager to leave Captain America behind.

Now it sounds like his tune has changed entirely as a new interview has Evans flat out saying, “Listen, if Marvel wants me they got me.” Chris Evans not leaving Captain America certainly shakes up some theories fans have had about his passing the shield, but it’s definitely good news.

Here’s what Evans told Collider while promoting his directing debut Before We Go:

“Listen, if Marvel wants me they got me. I’ve never had such a relationship where you have such—I mean look at my resume, I’m used to being on set being like, ‘Ah is this movie gonna be terrible?’ Marvel just can’t stop making great movies, they do it in their sleep. It’s wonderful directors and producers and actors and scripts, and it’s like a playground as an actor.”

Evans even paused for a quick thought about how he would feel if he passed on the role the first time around:

“It’s so mind-boggling that I was so tentative in the beginning to jump onboard. What an asshole I would be if I hadn’t done this. I mean can you imagine? Kicking myself—I’d never forgive myself!”