‘Star Wars’ #1 is going to sell over one-million copies. 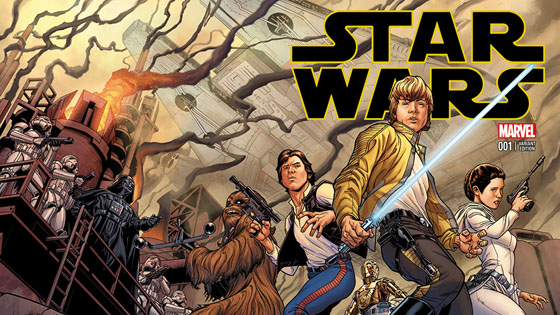 Next month Star Wars #1 is dropping on shelves, kicking off Marvel’s newly formed alliance with The Force. I had sort of expected it to sell a good amount, but apparently the fucker is going to be the highest selling comic in twenty years.

Reports surfaced last week that Marvel’s “Star Wars” #1 would exceed one million copies sold on the direct market, which would make it the top-selling single issue of the past 20 years. ComicBook.com has confirmed the report via Marvel’s Senior Vice President of Sales, David Gabriel, who noted that the publisher was exploring some new distribution channels for the landmark first issue.

“There are a number of new outlets that we’re working with here in terms of the folks purchasing and selling a large number of exclusive covers, which in the end means that this very large number of comics will be sold in places where we haven’t necessarily had comic sales,” Gabriel told ComicBook.com. “We’re confident we’ll have lots of new fans reading issue #1. And the great thing about this for all our comic retailer friends is that they’ll be able to sell those new fans the second, third, fourth issues and on and on.”

While Gabriel did not specify exactly what the alternative distribution channels were, he did state that even without the many variants for “Star Wars” #1 (Star Wars fansite RebelScum puts the current count at 38), the issue would still “make this the highest selling debut of 2015.”

Are you going to read the title? I figure the intrigue alone will drag me into buying the first issue. But aside from that, I’m not really hotly anticipating the son of a bitch. Who knows. Maybe I’ll change my mind in the next month.