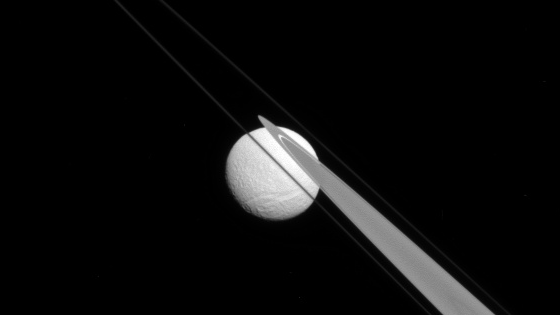 It’s all perspective, baby! That’s what I shout at the men and women recoiling from my advances at the local tavern. You could say I’m missing thirty teeth! Or you could say I have six! Perspective! Just like you should say that this picture is one of Saturn impaling its moon, Tethys. Or you could say it’s just a trick of the lens! That’s not the same? C’MON FUCK I HAVE SIX TEETH CUT ME SOME SLACK.

Full image and details after the jump.

Like a drop of dew hanging on a leaf, Tethys appears to be stuck to the A and F rings from this perspective.

Tethys (660 miles, or 1,062 kilometers across), like the ring particles, is composed primarily of ice. The gap in the A ring through which Tethys is visible is the Keeler gap, which is kept clear by the small moon Daphnis (not visible here).

This view looks toward the Saturn-facing hemisphere of Tethys. North on Tethys is up and rotated 43 degrees to the right. The image was taken in visible light with the Cassini spacecraft narrow-angle camera on July 14, 2014.

The view was acquired at a distance of approximately 1.1 million miles (1.8 million kilometers) from Tethys and at a Sun-Tethys-spacecraft, or phase, angle of 22 degrees. Image scale is 7 miles (11 kilometers) per pixel. 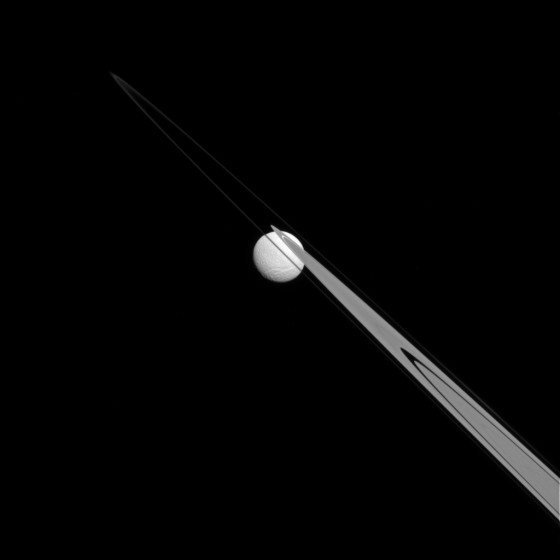