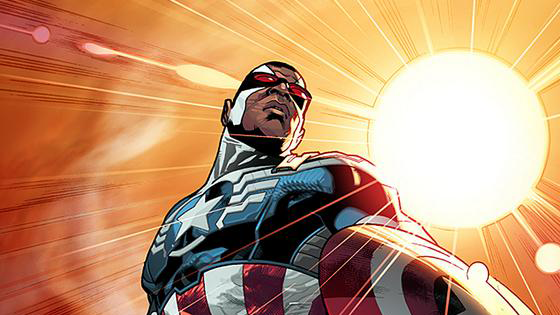 Ohhh man. You can hear the fanboys pulling their pubes out in hatred. Gnashing their teeth, particles of enamel and specks of drool hitting their keyboard as they type in hate. A female Thor? And now a black Captain America? Gracious.

“This is the fireworks factory we’re arriving at, and now everything’s going to blow up and be very pretty and exciting to look at,” Remender told Marvel.com. “I think that it’s important with these stories to do things that are natural and make sense and have an inherent logic to the universe, but are also constantly shifting and exciting, keeping the drama high. In order to do that it really comes down to creating new dynamics.”

Steve Rogers recently lost the Super-Soldier Serum that granted him his power — and age-defying vitality — leading him unable to continue in his usual avenging role, and paving the way for Falcon to pick up the mantle starting in October’s “Captain America” #25. Not only will Sam Wilson wield Cap’s famously mighty shield, he’ll also keep his signature Falcon wings.

“Historically, Falcon would often act as air support, flying Steve into the battle,” Remender said. “Why not merge the two? He doesn’t have the super soldier serum, but he has the added zing-zang-zoom of flight.”

“While Sam shares many of Steve’s beliefs in a general sense, he’s also a very different person with a very different background,” seres editor Tom Brevoort added. “He didn’t grow up in the 1930s, he’s a modern day man in touch with the problems of the 21st Century. For most of his professional life, Sam has worked as a social worker, so he’s seen the worst of urban society up close, and how crime, poverty, lack of social structure and opportunity can affect the community.”

Steve Rogers will remain a part of the series, described as taking on a hands-off tactician role in his dramatically aged state. Steve Rogers’ adopted son from Dimension Z, Ian, will also be a part of the series, taking on the Nomad role. Fans have speculated about Falcon’s new position since the cover of “Avengers” #35 was revealed in late May, and appeared to depict Sam Wilson as Cap as part of the upcoming “Time Runs Out” story.

The Falcon character was depicted in live-action for the first time in this past spring’s hit Marvel Studios film “Captain America: The Winter Soldier,” in a well-received performance from actor Anthony Mackie. The character first debuted in 1969’s “Captain America” #117, and is distinguished as mainstream comics’ first African-American superhero.

Interesting shit. And perhaps understandably I can’t help but see every Marvel comic book movie and wonder how it’ll affect the MCU. I could git this. While I’ve always silently prayed for Bucky to don the Stars & Stripes in the MCU, I’d be more than happy for Anthony Mackie to give the role a whirl eventually.