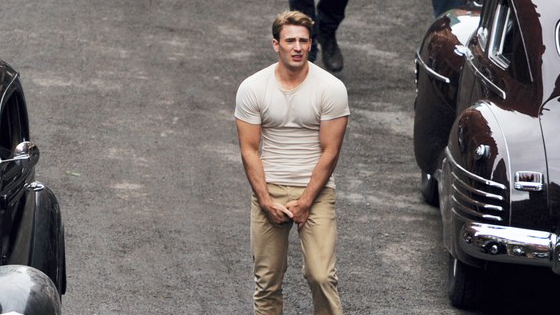 In case you’re a DUMB IDIOT who doesn’t like COOL THINGS, I’m going to let you know that Captain Canada: The Winter Steamboat comes out tomorrow. There’s a variety of reasons to see the movie. Like, it has special effects, and Natalie Portman. What more could you need? But if you’re a pig like me, you’re only in the movie theater for two reasons. To masturbate and eat popcorn. “So, Caff. What are you going to jerk it to?” That’s a great question, Dad. It’s a difficult choice. And I’ve spent some serious time thinking about it. I can’t jerk off to everything, this little pink nub gets tired. Two hours and twelve minutes? Good god. So I’ve decided to divide my heart into a series of segments. Isn’t that what society wants, anyways? Order imposed on emotion? Limits placed on speeds? Fucking bullshit coupons that can’t be stacked at SONIC for all my fucking hot dogs? Isn’t this what It is all about?

So I’m going to make it easy. A simple, simple, game.

This is the easiest one. Nick Fury’s eyepatch. You ever seen an eyepatch, bro? It’s pure erotica. I can’t even look at an eyepatch without getting the old two-incher throbbing. And the fact that we’re talking about The Nick Fury’s eyepatch just clinches the entire enterprise. Think of all the things that Laurence Fishburne has seen while playing Nic Cage. He’s probably seen Tom Hiddleston nude. Boom. Particulates on the eyepatch. When he was filming Star Trek Into Darkness (I still don’t think he’s a good Kirk but whatever) he probably shook Steven Spielberg’s hand. Boom. Particulates. Mace Windu. Boom. Boom! Boom! Boom!

I don’t know how Larry lost his eye, I think it was while filming Othello. But Praise Christ that he did. They say that you can turn every Tragedy into a Travesty, and I think that’s what this situation is, save for a little dash of seminal fluid. If you can’t get aroused at the thought of consuming the awkward leaking fluids of Fury’s gaping ocular maw, mixed with all the sundry other folks who have surely interacted with, I don’t know. Get fucked.

This is where I get a little controversial. A little off the deep-end. But, YOLO, I’m going to unfortunately inform you that I’m chucking Steve Rogers’ crotch. Yup. I know. You’re thinking – Super Soldier Serum powered thickie, tied to a torso that doesn’t quit. Abdominal muscles for days. No doubt a neatly coiffed blonde tundra of pubic hair. But friends! Friends! Have you learned nothing from the Smash Mouth song? Not all that glitters is gold, friends. Not even resplendent, well-brushed pubic hair, guarding incontestably the greatest groin since Jesus Christ’s.

Quiet, Dad. Your had your turn at the trough. Plus you’re still covered in your own boogers, and half-regurgitated hay. This is my moment.

First off, it’s well-known that Steve Rogers is a virgin. He’s been too busy destroying Skrulls in Avengers, fighting Elrond in Captain Canada: The Last Air Blender, and plunging his dumb ass into the ocean to unload his balls.

“But, what makes you think that he didn’t bone it out before he was turned into The Captain of America?”

That’s a great question. IF YOU’RE A FOOL. It’s perfectly accepted Head Canon that Bucky was waiting until marriage. It wasn’t a religious thing, obviously, but he just wanted to commit.

So now we have a dude who has seventy+ years of load backed up deep into his soul. His entire groinal section is a seething maelstrom of potential-children. Now it’s true that I have a thickened bung-bung from years of exercising and maintenance. But I’m going to level with you, no amount of horse steroids I inject into my inner thighs will ever strengthen me to the point where I’m comfortable engaging in a little Rogers consummation. I love him, but I ain’t willing to die for him.

Secondly, at this point in my life I’m looking for neither a vigorous, unrepentant fuck-life, or showing someone the sexual ropes. I’m forty-seven. I have three kids, a mortgage, and a job at the glue factory that has me exhausted at the end of the day. If Steve and I began what would be a Much Written About, Oft Studied (c’mon academia is a joke you know someone would cover this) Fucktastrophe, it wouldn’t be fair to either of us.

Just imagine. My thighs reddened from chaffing against his uniform (he has to wear the uniform), annoyed at him for awkwardly finding the prostate again (ugh, I showed you last night) but wanting to roll around again. We’d eventually clash. The lust would fade. He’d be unfulfilled. I’d be fighting a rash, a creaky back, and an exhausted hangover from all the Wine and Banging.

The glue ain’t bottle itself, right?

Star-crossed lovers, I know. Don’t write a pean for us. Buy me some of those SONIC hot dogs and find a baby sitter. You’re cute.

They say you don’t appreciate what you have until it’s gone. I thought it was a cliche. Something silly my Great-Great Auntie Debra said to me that night I kicked her fucking ass out of the car in the Floridian swamps. I warned her, guys. I warned her. One more ass-clapping diarrhea fart and she was hanging with the gators. But no. She ripped ass, I ripped the emergency break, and she probably dribbled out of an alligator’s dumper a couple days later.

But Auntie, oh Auntie. I was wrong. You were right. Life has taught me. Losing what I thought was my “superfluous” third testicle to the fire pole taught me. If only SHIELD would listen to you.

You see, no one seems to appreciate the Helicarrier. It’s Marvel’s kick-bitch. “Oh we need a scene of rampant destruction? Blow up the Helicarrier! Have Jeremy Roenick and his Hawk-Guy squad blow it up!” They’re not going to know what a wonderful transportation device they have until it plunges into Metropolis for like the fiftieth time in a cavalcade of smoldering buildings. And all the fans love it! And Marvel loves it! And oh god Industrial Light & Magic loves it. Every time they are paid to destroy the Helicarrier, George Lucas prolapses gold Milky Way bars onto the floor at the quarterly meetings.

But me? I’m a little tired of it. I want to take care of Clyde. The Helicarrier.

Over a wonderful montage, I’d teach Clyde to love himself once again. We would run through the forest. Shirtless. Maybe a little tickling. Cut To! We’re eating ice cream. I’m nodding intently as he tells me about how Nick Fury wouldn’t flush or wash his hands in Clyde’s bathrooms. Cut To! Me looking concerned. Cut To! It’s night time.

Clyde points up in the sky.

“That’s where they shot me down!”

Clyde looks over at me.

“That’s also where I fell in love with you.”