ASTEROID in our solar system GOT A RING SYSTEM. 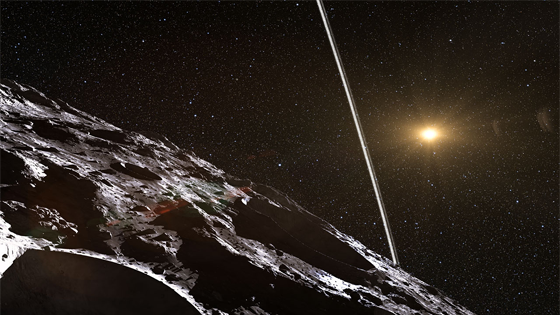 For the first time ever, astronomers have identified a small planet with a ring system. They previously thought that such a phenomenon could only happen on large planets like Saturn and Jupiter. But this special space rock, known as 10199 Chariklo, is a small planet called a Centaur.

The discovery came down to the blinking that these kinds of bodies produce when they pass by stars, an effect known as asteroid occultation. “We were amazed to see that the star didn’t just blink out and come back – there were very short blinks before and after the main dip, which could only be explained by rings,” says Colin Snodgrass of the Max Planck Institute for Solar System Research, who helped find the ring. The European Southern Observatory also played a major role.

The most curious thing about 10199 Chariklo isn’t just the fact that it has rings, but how they stay put. Astronomers think that they’re able to remain in orbit thanks to small objects known as shepherds that provide a gravitational push. It’s kind of poignant when you think about it, huh? [Gizmodo]