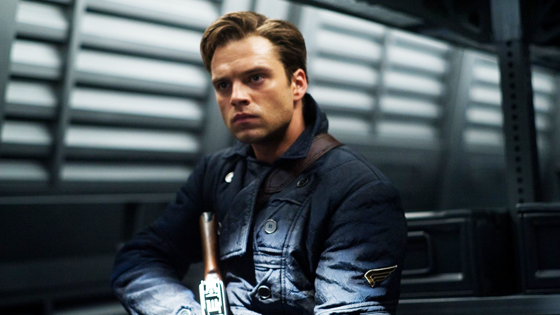 It turns out that Sebastian Stan’s (Bucky…and well, don’t IMDB if you don’t want to know) Marvel movie contract is longer than Chris Evans’. At first blush this seems confusing as Hell. Especially to someone who is a comics outsider. However, fans of Ed Brubaker’s run on Captain America (HI! IT MAKES MY DONG FROTH IN WAYS THAT DEFY ONTOLOGICAL EXPLANATIONS) know how this could work. In a glorious, glorious way.

Hit the jump for (what I hope) is accurate speculation.

Actor Chris Evans recently announced that his contract with Marvel is for six movies, and that he might take a break from playing Captain America after it’s done. We didn’t think anything of it… until today, when Sebastian Stan, who played Bucky in the first film, suddenly announced his contract is for nine films.

Look, nothing is set in stone here, and it’s very possible than Marvel will drive a dump truck full of money to bring Evans back on for Captain America 4 (they’ve done that with Robert Downey Jr. at least once by now) or even more movies. But it does seem weird that Evans’ recent announcement about his possible break from the role was followed so quickly by the news of Stan’s astonishing nine-picture deal.

Not too long ago in the comics, Bucky did take the mantle of Captain America for a time. Will this also happen in Marvel’s cinematic universe? Have they already been planning for Evans’ departure from the role? If not, what on Stan Lee’s green Earth does Marvel have in mind for the character of Bucky that requires a nine-picture deal?

Spoilers if I’m right: Steve Rogers dies (or appears to) at the end of Captain America 3. Bucky fills in as Cap for Captain America 4 and an Avengers film or two. Evans gets his break, and Rogers comes back to the cinematic universe just like he did when this happened in the comics, probably over the course of Captain America 5. What do you all think? [io9]

I don’t know if Cap 3 would be the place to do it, though. Isn’t that…before Avengers 3? ‘Cause I can’t imagine them taking Evans out of the conclusion to the trilogy. But this all makes sense. I can hope. I loved Bucky’s run as Cap, and it sets the stage for a totally nuts-tightening return to by Rogers.