Archives
« ABSURD: ‘RESIDENT EVIL’ composer is a fraud. Also may not be deaf as he claimed
Neil Gaiman’s ‘AMERICAN GODS’ getting another run at TV adaptation » 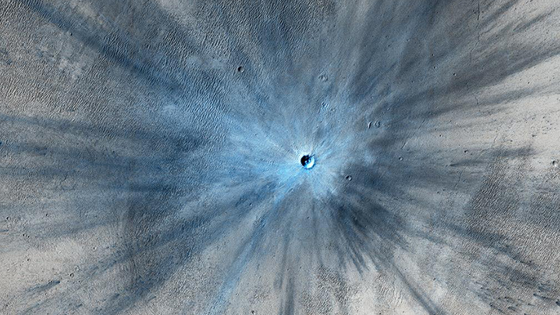 Not everything is Ray Bradbury and Mars Attacks up on the surface of the Red Planet. (What does that mean? Nothing. Just making up nonsense.) An asteroid struck the face of Ares between 2010 and 2012, leaving Mars feeling a little blue.

Hit the jump for the image and some deets.

Boom! You can almost feel the impact that formed this recent Martian crater. Yes, Martian – the planet’s characteristic red has been removed from this image, leaving just the bluish hues of the material thrown up from beneath the surface.

The crater is about 30 metres across, and the impact ejected material as far as 15 kilometres away. This image was snapped by NASA’s Mars Reconnaissance Orbiter (MRO) last November, but the asteroid that made the splash is thought to have hit Mars between July 2010 and May 2012. MRO’s low-resolution camera spotted a change in the surface between those two dates, so NASA scientists trained the high-res camera on the area for a closer look.

MRO has previously captured avalanches that Marsquakes may have caused, mysterious rolling boulders and even papped its robot buddies on the planet’s surface. 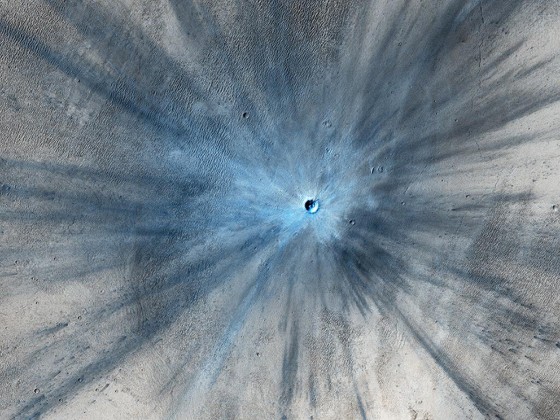