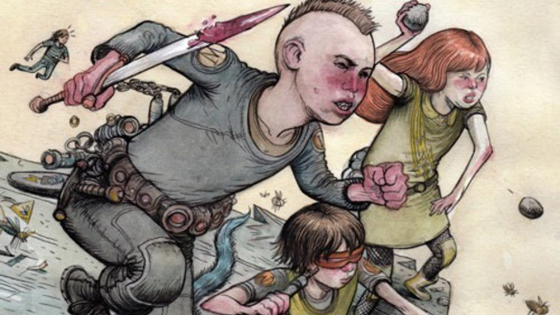 The Wrenchies is coming. Are coming? Grammar, man. Anyways. I’m one of those goons who didn’t come across Farel Dalrymple until his rocking work on Prophet. However, I’ve been feverishly following him since then. The talented son of a gun is releasing the aforementioned Wrenchies this Fall, and it’s going to be a brutal wait. The premise is intriguing, and the creator’s list of inspirations for the title is a veritable rundown of my favorite things.

The beautiful, complex art of Farel Dalrymple has been missing from the shelves in a major way for a while. His Popgun War was exquisite, and his adaptation of Omega the Unknown with Jonathan Lethem would be a comics classic if it were kept in print.

Luckily, the Dalrymple Drought is about to end with the release of The Wrenchies this fall from First Second. IT’s set in a grim world where children must fight and kill demons, even while they know if they grow up they’ll turn into demons, too.

The LA Times has debuted the cover, and has a preview of a few pages and an interview with Dalrymple.

The idea for “The Wrenchies” came from a 15-page story I did for the “Meathaus S.O.S.” anthology about two brothers who go into an evil elf cave. Using that as a springboard and a bunch of other notes and ideas and drawings from my sketchbook I put a few pages of plot together. Then I did a bunch of color character and concept drawings for what I had in mind. I gathered inspiration from a variety of sources: “A Wrinkle in Time” by Madeleine L’Engle, “Fight Club” by Chuck Palahniuk, “The Brothers Karamazov” by Fyodor Dostoyevsky, “Akira” by Otomo Katsuhiro, “Nausicaa” (the manga and movie) by Hayao Miyazaki, movies such as “Over the Edge” (1979), and movie directors like David Lynch, Werner Herzog and Wes Anderson, “The Prisoner” television program, Moebius’ “Airtight Garage” stuff, and old Heavy Metal magazines, Marvel comics from the 1980s, the cartooning work of Tom Herpich, Brandon Graham, Mike Mignola, Taiyo Matsumoto, Tatsuyuki Tanaka, Dave Cooper, Paul Pope, and a whole bunch of other guys. 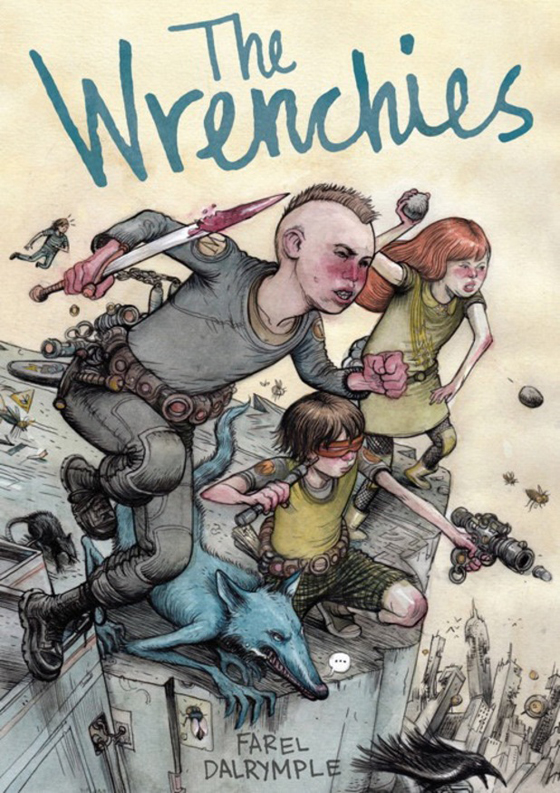