Archives
« Cosplay: You had me at ELEKTRA. Pale beauty of death
‘ANT-MAN’ July 2015 release date moving up to old ‘BATMAN VS. SUPERMAN’ one » 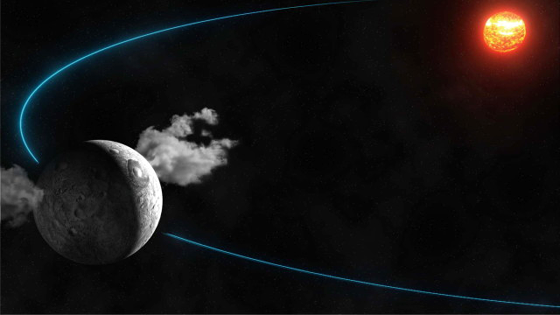 Ceres. You big fucking rock-ice asteroid motherfucker. Holding out on us all this time. I mean we (humans, space-wizards in particular) thought you had some form of water on you. But you just wouldn’t let us confirm it. Now you’re just flaunting your water supply. And frankly, it’s ostentatious.

We’ve observed water on Ceres. The largest object in the asteroid belt, you may remember Ceres as the round, rock-ice body that was considered for reclassification as a planet in the midst of Pluto’s demotion. Astronomers observed the water in the form of vapor plumes, possibly issuing from volcano-like geysers on the dwarf planet’s surface.

“This is the first clear-cut detection of water on Ceres and in the asteroid belt in general,” said Michael Küppers of the European Space Agency, leader of the study that recounts the findings in today’s issue of Nature. SPACE.com’s Tanya Lewis has the details:

Scientists have suspected that there is a substantial amount of water on Ceres for about 30 years. A study found hints of water in the form of hydroxide, a product of water’s dissociation, on Ceres in 1991, but the finding wasn’t confirmed by later observations. Now, Küppers and his colleagues have confirmed the finding.

The researchers used the Herschel Space Observatory’s spectrometer to look for signals of water. Clouds of water vapor around Ceres absorbed the heat that radiates from the dwarf planet, which Herschel’s instrument detected. The team found that Ceres produces about 2×10^26 molecules, or 13 lbs. (6 kilograms), of water vapor per second from its surface.

One possible source of the water is icy volcanism. “It is like volcanism in that hot material from the interior is ‘spat out’ to the surface,” Küppers said — much like a geyser. But these icy volcanoes eject water vapor instead of molten rock, he said.

Another possibility is that ice near the surface of Ceres sublimes, or goes directly from a solid to a gas, dragging with it dust from the surface and exposing more ice. A similar process occurs on comets.