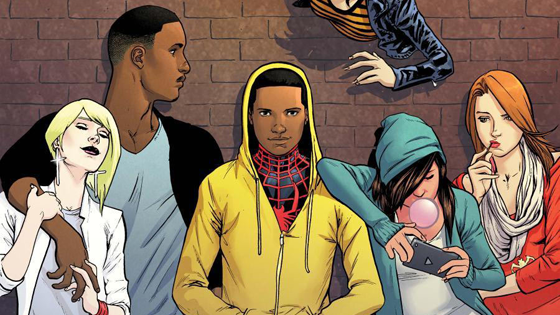 Fuck yeah! If the Ultimate universe lives, I’m glad this is the form its taking. Everyone and their dumb brother seems ruined by Galactus, leaving Miles Morales to pretty much run the fucking show. I love it. I love it!

Even though their Earth is apparently in its final days as a dimensionally-displaced Galactus rampages through New York (after having eaten Jersey), Miles Morales, Kitty Pryde, Bombshell, Cloak & Dagger and Black Widow (formerly Spider-Woman) have been announced as the main players in a new series spinning out of the destruction of “Cataclysm.” “All-New Ultimates,” written by Michael Fiffe (COPRA”) and illustrated by Amilcar Pinna, follows the adventures of the group of young heroes as they attempt to manage living in a world that was nearly devoured.

“Once again, we’re destroying something and building something new, but there’s an end game in sight,” Editor in Chief Axel Alonso told the Associated Press. “We created the line to take chances. Dead is dead. The long and short of it is this: The Ultimate (universe) benefits from a good, old kick in the butt.”

Brian Michael Bendis and artist David Marquez, for their part, will continue their partnership in the Ultimate U with “Miles Morales: Ultimate Spider-Man,” a new title for the boy who replaced Peter Parker under the webbed mask several years back. “You can look at this as kind of his Bar Mitzvah of sorts and, now, he has to take the reins of Spider-Man under the new world he finds himself in,” Bendis told the AP of the character’s post-Galactus reality.. “His entire life as a human being has changed.”

Finally, Joshua Fialkov, one of the current architects of “Cataclysm,” is joined by artist Mario Guevara for “Ultimate FF,” which focuses on Tony Stark, Sue Storm and several more of the Ultimate U’s most brilliant characters. “It’s a team of geniuses, four of the smartest people in the Ultimate universe,” he said. “And we’re missing one, and that one happens to be a psychopath.