My neon-lit, arcade childhood was a world where winners didn’t do drugs and the baddest kind of dudes were the ones that ended up rescuing the president. A generation of regular Snake Plisskens. Now, one of the most anticipated games of the entire generation looms on the horizon, but GTA V isn’t offering us the chance to be a hero, rather, it’s giving us the chance to be the criminal badass of our dreams. There’s no denying it: being a criminal is a shit-load of fun.

Last week, Rockstar dropped the info detailing the online portion of GTA V. Titled simply as Grand Theft Auto Online, it’s meant to serve as an almost self-sufficient component of the game, bringing with it promises of constant updates, a stream of fresh content and the chance to live out your virtual crime fantasies to their fullest. This is something I’ve waited a long time for.

I’m not into weird shit like Centuar sex at a virtual Duran Duran concert in Second Life, nor am I the kind that gets a thrill from demon slaying of any kind. Shooting terrorists in the face leaves me feeling conflicted and I stink at sports games. So, Street Fighter aside, the world of online gaming has never really offered me very much. Like the downtrodden kid in that movie I never wrote, where a life of rejection and isolation led him to pursue the thrill of a criminal lifestyle, I found myself playing some pretty shitty games. 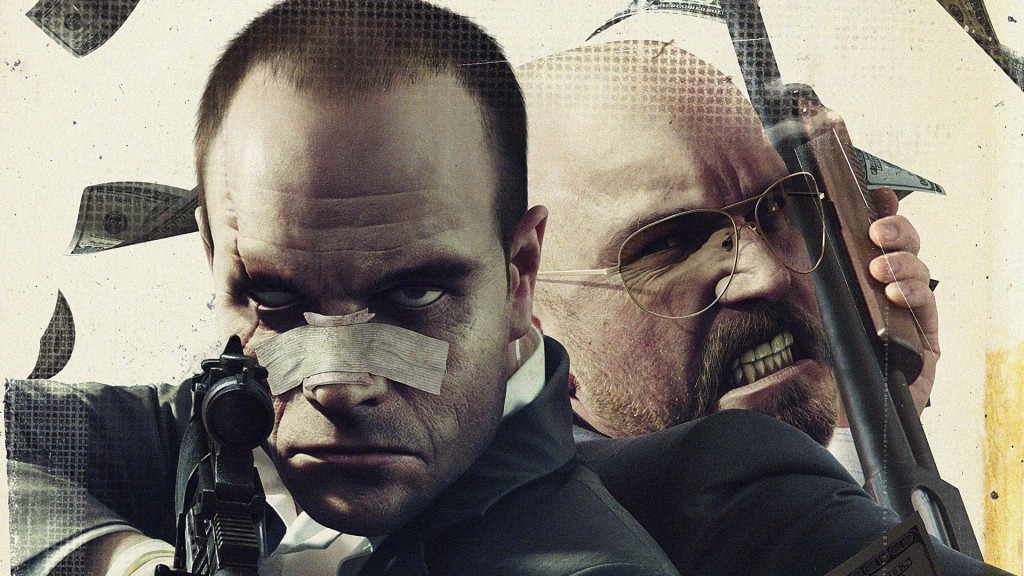 Hours upon hours of my early twenties were misspent with IO Interactive’s criminal action game, Kane & Lynch. Admittedly, the game was a turd, but it pulled its references from something very close to my heart. This tale of two unfortunate, and one mentally unhinged, criminal anti-heroes channeled Michael Mann’s Heat in spades and gave me a portal into one of my greatest and most unattainable fantasies: being a professional bank robber. I’ve told myself, endlessly, that I’m just not suited for a life of crime. “Stick to getting a boner over the intro sequence of The Dark Knight, Ben.” I would say, in the mirror: crying. No way is a buttery man-child raised in the rural depths of the South Wales valleys cut out for a life of heists and chases. What would I even bring to the table? I’m fairly sure that just thinking bank robberies are really, really cool would not count as a necessary skill required to join a crew. In fact, that sounds like a sure-fire way to get myself killed. What Kane & Lynch did have going for it was a pretty amazing online mode that saw you and a crew of other players tackling various heists and dividing the money between the surviving parties. You could choose to turn on your partners to take a bigger slice of the cash, but they would come back, bitter, emboldened, and as a cop: ready to put you down and claim the reward. I made a career from teaming up with friends and screwing over the hapless lone players that were unfortunate enough to join our lobbies. I was a virtual crime lord at this point, yet, ultimately, it was all for nothing: there was nothing particularly cool to spend all that virtual bank on.

What GTA Online promises is a world where my virtual theft skills and cold, criminal heart will be rewarded with the chance to get my avatar iced-the-fuck-out and be rolling on some twenty-somethings (whichever rims are cool right now, I don’t know). You will also be able to buy your own apartment/hang out for yourself and your crew as well as being able to buy the best clothes and/or guns. Be sure to get those priorities straight.

Now, not only can I scratch that criminal itch, but I can also practice it within the safe confides of virtual reality. Sure, there are no real rewards, but there is no real punishment either. This suits me well: a life of crime with no strings attached. After all, I’m no thug, hardened and ready for this lifestyle, this should be well-established. I’m Angela Lansbury, George Costanza: crime game Ric Moranis. I wouldn’t stand a chance in the real world.

Whilst running around with guns, wearing animal masks and stealing other people’s shit can hardly be considered as ‘mature’ activities, this new age of online GTA represents a maturing of the industry and the culmination of Rockstar’s many years of hard work. This is the future as envisioned by The Houser Brothers. This will be a game, contemporary by its online nature, that will provide an immersive experience for anyone who is bored to bleeding tears by the thought of playing another game that involves dragons or fucking wizards. Let it be known, however, that if it was fucking wizards, I’d be down for it. Rad, Skinner-illustrated wizards: sign me up. Look at those guys fuck! But the Tolkein-raping middle-of-the-road snore parties have broken me down to a bitter pile of crumbs in recent years and I’ve been forced to miss out on all of the online fun.

This is exactly where video games should be right now. They’re slacking and, as per, it’s down to Rockstar to push things forward. The Housers and Co. have made a career off the back of their forward thinking mentality and what their detractors see as a childish preoccupation with being the bad guy. But beneath all the hardman posturing, guerilla marketing and Ray Liotta obsessing is a company with the future of gaming firmly in their sights. As questionable as their content may be to some, it’s a necessary element that allows the video games spectrum to edge closer to the likes of other media forms, or, at best, forge a diverse and unique landscape of its own.

Living out the criminal fantasy online helps video games take one step further away from well-worn sci-fi and fantasy tropes and provides wannabe, Bart Simpson types like myself the outlet they’ve always looked for. Yeah it’s moronic and sure, most criminals should really not be praised, but at least I get to be immersed in being someone other than a Paladin searching for gold and enchanted armour.

Shout outs to all my Paladin fam though. No hard feelings.