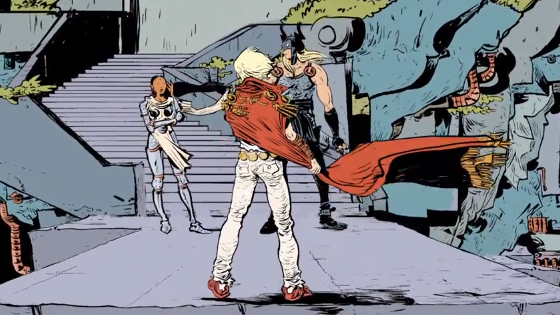 I’m very excited to be able to launch the trailer for graphic novelist Paul Pope’s new book Battling Boy, a major release from FirstSecond that hits shelves in October. Here’s what First Second says about Battling Boy: “After 13 years, author Paul Pope has written his first major graphic novel, called Battling Boy. Clocking in at 208 pages in full color, Battling Boy is Pope’s first work aimed, like Jeff Smith’s Bone, at an audience of all ages. EW calls Pope’s Battling Boy, ‘A new generation superhero.’ Battling Boy is set on the planet Arcopolis, a world where monsters roam the streets at night (and sometimes during the day as well). Only one man stands against the ever-growing monster tide — the genius vigilante Haggard West. Haggard West dies in the first chapter. All hope seems lost: Arcopolis is desperate. But when its salvation comes in the form of a twelve-year-old demigod, no one is more surprised than Battle Boy himself.”