A Treatise on the Defense of J.J. Abrams and the World of Into Darkness: A Warrior’s Tale 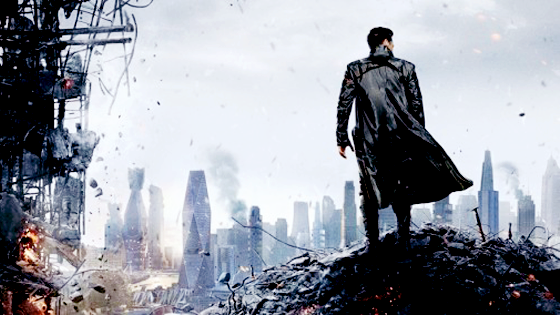 [Caff Note: A good friend of Rendar and myself wrote this rather awesome defense of Star Trek Into Darkness. I imagine he saw dullards like me bashing it, and decided to wave a righteous saber. Despite not seeing eye to eye with him, I demanded that he allow me to share it here. Enjoy.]

Into Darkness.  What’s in a title?  Nothing (if you ask me).  However, Into Darkness attempted to conjure into the minds of the would-be viewers a universe that was literally entering into a ‘darker’ world.  Into Darkness is the post 9/11 Trek – a world in which, yes, you can die.  Into Darkness has a body count that would rival the epic end of Commando. More humans (not Vulcans) die in this film than in any other Trek film.  San Francisco is literally leveled to the ground at the end of the film.  Is this a forward direction for Trek? Did Abrams destroy a franchise that deserved something more?

Abrams is not a perfect director by any stretch of the imagination.  He has, however, much like the fat bastards in Hutt Space, engulfed the known galaxy of sci-fi blockbusters, and soon to come, many far, far away.

I have been reading lately many attacks on Abram’s interpretation of the Trek world, and also whether he will do a respectable job reincarnating the 1977 rape victim that is Star Wars (RIP).

For the latter, I have no answer, suffice to say he should probably just take Knights of the Old Republic and turn it into a 300 billion dollar epic.  I’d pay a pretty penny to see that.

For the former, in his work with Star Trek, I am intimately aware that he has done a fine job due to my total immersion in the Trek world for a good portion of my short, and mostly meaningless, stay on Terra Firma in the Sol System.

Star Trek: Nemesis was everything that is bad in a Trek film.  Look up the details.  I will save you from hearing me repeating what everyone else has already said.  I saw the film in high school and thought to myself, “Well shit… Trek is dead.”  I am not alone in sharing this sentiment.

Then, as if springing from the doomed tombs of Moria, I read on some blog that Trek was getting a 2009 reboot.  I cringed at the thought of the ghost of Roddenberry committing the Kobiyashu Bukake on the franchise he helped launch into the sea of stars.

The new Star Trek has taken the entire franchise, I would argue, in an entirely positive direction.  Yes, the 2009 flick is better than the 2013 sequel.  But is Into Darkness really that bad?  It was a sustainable, and entertaining sci-fi summer blockbuster that tickled every pseudospacesexual (huh?) itch that I had.  Did it push the series further?  Hell yes.  Kirk is now a mature captain, not some snotty nosed asshat from Iowa.  Spock has more emotional awareness in 4 hours than he did in 3 seasons of the 60’s classic.  I think this is a good thing.  It will lead to more down the road.  After all, how did Into Darkness end?  With the opening of the five year mission that was the pretense for the opening to the 1966 pilot.  I hope that the screenwriters look at this opportunity to give us, for the first time since the Borg, a new franchise entity.

Let’s totally change subjects for a minute and talk about something I do agree about in regards to Abrams manpounding too many stellar sisters.  The blending of Trek and Wars will ultimately be a bad thing for every type of nerd whether they drink Earl Grey or look for Dagobah.

Reiterating my previous claim, I will not talk about the future Wars.  I do not know enough of the future development to pretend to comment on that potential thunderfuck.  With that said, I fear Trek has been negatively affected by the ‘gritty’ world of Wars.

Star Trek to me was always the pseudo-utopia of the space future.  It was rarely man vs. man and rather man vs. I-am-going-to-completely-fuck-you-up-force-of-nature\alien. Humanity had settled its quibbles with a billion+ casualty thermonuclear holocaust during WWIII (in the 21st century according to the Star Trek Chronology).  In effect, Star Trek is a study on humanities greatest reaches after blowing itself into oblivion.

Star Wars, on the other hand, is a near biblical\fantasy study on good vs. evil with some Eastern religion bullshit for toppings.  Star Wars has nothing to do with human progress, because after all, it is not set in the Milky Way.  I always loved this about Trek vs. Wars – they are separate but equal beasts scouring the labyrinth that is nerddom.  Star Wars is beautiful for the twin suns setting over Tatooine.  Star Trek is beautiful for the sunset over the Golden Gate Bridge at Starfleet Academy.  Why can’t I adore both?

Into Darkness jolted me a bit because it had a Falcon.  That’s right, a Millennium Falcon that looked old, shitty and smuggleresque.  I found this disturbing because Trek was always clean, and Wars was always dirty.  Each deserves its own territory.

Well, this post has officially jumped the space shark.

Suffice to say, I could not stand quiet while Into Darkness was lambasted by my geeky peers.  Remember, before the reboot, the best we had was Wrath of Khan.  Watch that again, and get back to me.

Live long and prosper and may the force be with you.