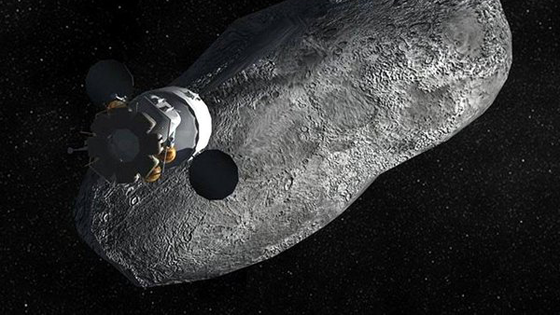 Watch out, asteroids. Your days of romping about the space neighborhood with unfettered access shall soon be over. Uncle Sam is aiming NASA at its next goal, and it is to capture an asteroid. It ain’t exactly Mars, but….I don’t know. Yay?

There have been rumors about NASA’s next major project ever since Senator Bill Nelson of Florida mentioned some jazz about wrangling an asteroid. Now a White House official has confirmed the plans to NBC, explaining the goal is to get samples within the decade, and then think about Mars.

The senior Obama administration official, who divulged the details on condition of anonymity, confirmed Nelson’s claims that the White House will seek over $100 million in funding to lasso an asteroid and get some astronauts up there to check it out by 2025. Then and only then will NASA’s eyes turn to putting humans on Mars.

The idea has been kicking around for a while, but Russia’s recent brush with space-rock disaster seems to have kicked things into a higher gear. The plan would involve sending a probe out to a nearby, 500-ton asteroid around 2017, catching it in a giant space-bag by 2019, and then toting it back to live in stable orbit around the moon, where it could be studied. The whole production has been calculated to cost somewhere around two billion dollars, or as little as one billion on a very strict budget, which could be split into 100 million over a decade. This apparently, is the first step.

The official put it this way to NBC in an email:

This mission would combine the best of NASA’s asteroid identification, technology development, and human exploration efforts to capture and redirect a small asteroid to just beyond the moon to set up a human mission using existing resources and equipment, including the heavy-lift rocket and deep-space capsule that have been under development for several years

…We need to prove we’re smarter than the dinosaurs.

Nothing will be official until a budget request on Wednesday, but it looks like this is the real deal. We’ll be getting our very own pet asteroid sometime in the next ten years if all goes well. Welcome to the future. [NBC Cosmic Log]