It’s no surprise that most of my favoured games this year are download-only: games free of the constraints of large publishing deals and the costs of physical media. I like those physical artifacts as much as the next self-respecting hoarder, but when it comes to gaming and the creativity that I’ve seen flourish within the digital marketplace, it seems all the more difficult to pine for the past. The future of gaming is increasingly digital, independent and passionate: a fact well-displayed by some of the better releases this year. As Bobby Kotick plots to overthrow Steam, kill Gabe Newell and eat his heart to gain his strength, let us celebrate the games of 2012. 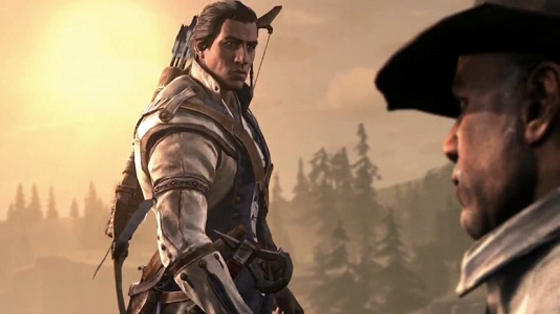 Let’s get this out of the way, shall we? I’m almost undoubtedly being unfair in my treatment of Assassin’s Creed 3, but as it stands, this game represents just about every problem that I have with contemporary gaming. Beyond the forgettable multiplayer mode and the complete lack of invention is a game so swollen by its own misguided ambition that it manages to transcend the medium. Assassin’s Creed 3 is less of a game and more of an overwrought, pointless and boring digital narrative that contains brief flashes of laborious interactivity.

A game cobbled together by work from multiple teams over the globe feels exactly as it should; broken; disjointed and without any defining characteristics. It begs, borrows and steals half-finished mechanics from superior games in a vain effort to justify its existence as a product. The sooner games stop being a dumping ground for Hollywood rejects with a penchant for The Matrix and an unhealthy obsession with the  Illuminati, the sooner I can calm down and go back to normal.

Pompous, flawed and excruciatingly dull: Assassin’s Creed 3 left a stale taste in my mouth and was another nail in the coffin for the games that define themselves as “AAA”. 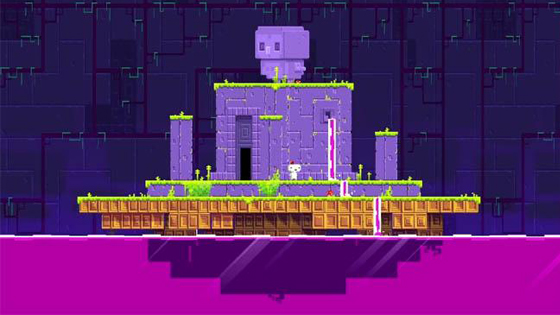 What can be said about Fez that hasn’t been said already? Wildly imaginative, charming and heartfelt: Fez is not only my game of the year, but also one of the finest gaming experiences I have ever had.

Beneath the high-concept level design, indie-chic, striking visual direction, sublime audio and controversy lies the most sincere love letter ever written to the gaming medium. Fez is a game that takes its influences seriously: revering the likes of Zelda and Mario as if they were works by Dickens or Kubrick. It is a game that wears its heart on its sleeve and channels youthful fascination into mature introspection.

It’s the unspoken words of every kid who wondered how their Nintendos worked. This is that imagined world beyond our vision: the unseen magic kingdoms inside our games that shipped quantified fun through RF cables and into our hearts.

No game has ever made me so proud of the medium, nor inspired so much passion in me. I would swear fealty to this game, should the opportunity arise. 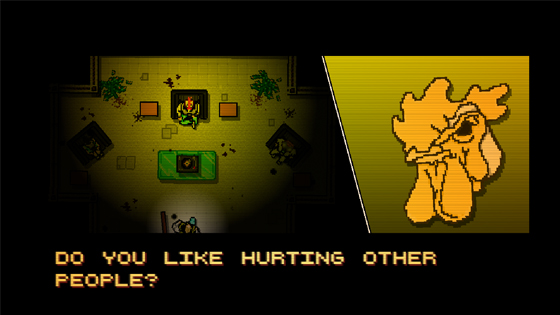 Beyond the precise mechanics and ultra-violence lay a game that signalled a new wave of future indie classics. Hotline Miami is brazen, focussed and accomplished: built and released by two men with a singular vision and little regard for contemporary game design trends. This is as close as gaming has ever come to being punk. Suda 51 is already kicking himself for not making it first. 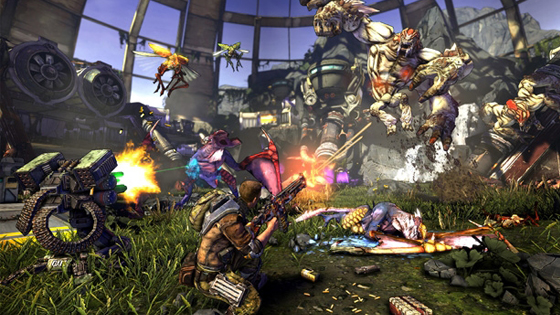 Dude, have you got that Bee Shield? You know the one; it fires spikes and does crazy amp damage and has a super-high capacity It’s fucking AMBER. For a few months of this year, all of my conversations went a little something like that: spunking over rare loot drops and that one gun that doesn’t require any ammo. Borderlands 2 turned me into a loot fiend and consumed my early evenings for longer than I can remember. I couldn’t even hold adult conversations any more, because I just wanted to tell my boss about the amazing class mod I picked up the previous night.  The game is genuinely funny, bursting at the seams with character and deeply compulsive. If I had to ride out eternity with just one game, this would probably be it. 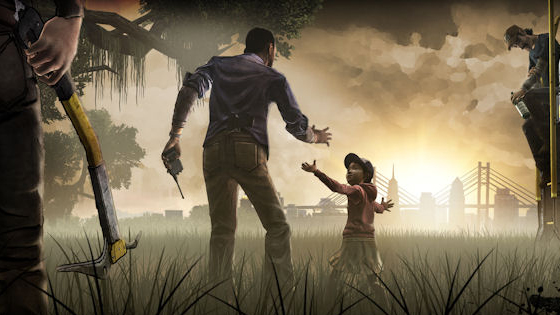 Given how often I crow about the notions of ‘mechanics’ and ‘pure gameplay’ , you’d be forgiven for thinking that I didn’t care much for storytelling in games. You’d be wrong, of course: I just think you need to get the foundations built before you go spinning elaborate yarns.

The Walking Dead found a perfect home for its narrative ambitions in Telltale Games’ updated point-n-click format. This is a game that managed to both shock and upset me, but it also made me care. I genuinely cared, and still do, about the choices I made, those who lived, those who died and those that were left behind.

A simple interface proved the most effective framework for an ambitiously narrative-driven series; showing developers the world over that, if you want to win awards, bigger isn’t always better. You’ve just gotta have heart, man. 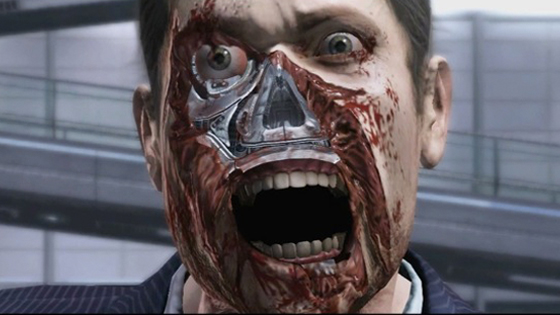 SEGA’s proof of worth was twofold when they released Binary Domain earlier in the year. For a start, they showed the world that the third-person cover shooter was no longer the sole domain of western developers: replacing the genre’s increasing reliance on spectacle with water-tight controls and satisfying combat. They also reminded the world of who they were: SEGA aren’t just the home of Sonic & Tails, but are also the company that have given us the likes of Kid Chameleon, Comix Zone and Shinobi. Binary Domain was a nostalgia trip for anyone that bought into SEGA because they were way cooler than Nintendo and a fantastically solid shooter to boot. 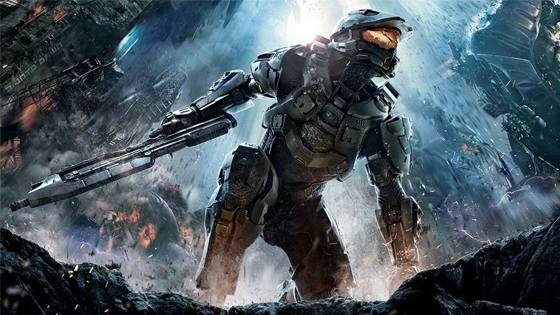 By now we’re used to our big-name shooters striving to deliver the ‘complete package’ experience. But, with Theatre, Forge, Multiplayer, Co-op, Waypoint and the ongoing story of Team Crimson in Spartan Ops mode, Halo 4 does it better than anyone else.

Even if the game turned out to be a stinker, you can’t deny the satisfaction that this kind of value brings. Luckily, Halo 4 is a firm reminder that console shooters were laughable incarnations of their PC counterparts until the original Halo landed on the Xbox over a decade ago. This is the series that built the console shooter framework and it continues to innovate and define the genre in the hands of its new masters over at 343 Industries. Most definitely the success story of the year. 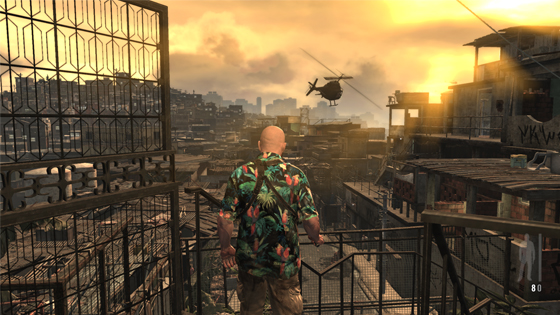 As much as I’d love to mention how much I dug Dishonored’s steamy Dickensian nightmare aesthetic with this award, I’d be kidding myself if I awarded it for anything other than Max Payne 3’s drunken, sun-bleached hell-haze. If anyone can handle tales of booze-soaked retribution in the seediest of worldly underbellies then it’s the good people over at Rockstar. Matching a Michael-Mann inspired starkness with a torturous tone that would make Aranovsky shiver was a master stroke, and one that proved that Rockstar’s affinity for cinematic flair went beyond mere Hollywood-aping tactics. They employed a tone that matched Max’s story and then had the decency to use it as a coating for one of the most visceral and gratifying shooters I’ve ever played. 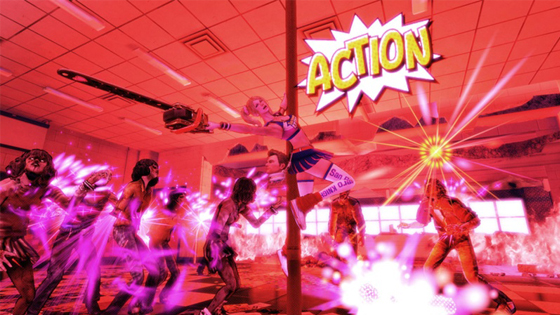 If Juliet Sterling didn’t handle like a busted-up shopping trolley, Lollipop Chainsaw would be a classic by now. Alongside a colourful cast of musical zombie bosses and a bizarre Suda 51/Troma aesthetic lay a poor man’s Devil May Cry that exhausted more gaming tropes than I care to mention. However, it did manage to be genuinely funny at times; had a busty zombie slaying cheerleader for a protagonist and a pretty decent soundtrack. Upskirt panty shots whilst you decapitate zombies with your rainbow chainsaw, all whilst Toni Basil rocks out in the background. That memory alone deserves an award.

And so, on to 2013. Along with it comes the promise of true greatness from Bioshock Infinite, the anti-rape fantasy with the Tomb Raider reboot, apocalypse-porn with The Last of Us and razor-sharp, vocabulary-expanding absurdity from Metal Gear Rising:Revengeance. Did I miss anything?