I’ve not slept much this week. I’ve been consumed by thoughts of an imagined reality. I’ve been filling in the gaps, if you will: fleshing-out video game lore with some disturbing possibilities. Imagine the horror of being an animal trapped inside one of Dr. Robotnik’s murderous cybernetic shells: trained upon killing your only potential savior and being powerless to stop yourself. You try to resist, but the mechanical death-suit overpowers you: contorting and forcing your limbs into committing unspeakable acts.

You gaze downwards in horror at your blood-washed metallic hands: feeding tubes sustain your existence and damn you to a perpetual waking nightmare. As you gaze in horror at Sonic’s desecrated entrails, the suit gives you just long enough to truly absorb the horror of it all, then it contorts your limbs once again: wrenching your frail body towards an even darker purpose. Now you know that your family will die at your own hand.

If there’s one thing I hate more than listening to Peter Molyneux witter on about ‘changing the face of gaming’, it’s imaging a gaming industry without him. For all the bullshit and disappointment, the man is genuinely enthusiastic about what he does. Not enthusiastic like grabbing his junk and putting chainsaws on/in/up everything (I’m looking at you, Cliffy B) but enthusiastic in so much that he honestly believes that there is always more to be achieved with the medium.

Usually, Peter’s hyperbole can be taken with a pinch of salt. I’ll brush it off, chalk the guy up as mental and then play his next game and find it falls short of everything he promised. This time however, it’s all change: Peter’s moved the goalposts and now he’s asking for my money before he even starts making the game. Along with 22 cans – the team that helped realise his vision of millions of players endlessly tapping away at a really big cube – he’s began a Kickstarter fund to bring an all-new God game to market: Godus.

Playing on Peter’s Bullfrog legacy and showcasing much of the talent that helped keep the unchained dreamer on-task back in the day are certainly reassuring. Hell, I even briefly entertained the idea of pledging when the video showed other team members actually reigning-in Peter’s wild and impractical ideas. It was all going so well, until the end. ‘Change The Nature of Gaming’. Seriously, that’s one of your goals? For fuck’s sake, Peter, have we learned nothing? It’s like that time you told me I’d care about my dog in Fable II all over again. 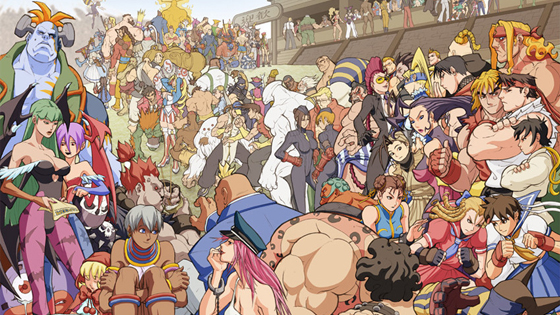 If you know anything about me by now it’s either something to do with my chronic cycle of masturbation and comfort eating, or the fact that I lose my mind over anything involving Capcom and brawling. Capcom’s beat ’em up legacy could be based solely upon Street Fighter, if they so chose, but yet they also gave the world the likes of Rival Schools, Final Fight, Darkstalkers, Marvel vs. Capcom and many, many more. If my gushing fanboy prediction is anywhere near accurate, then they’re about to pillage the hell out of their legacy for this latest trademarked title: ‘Fighters of Capcom’.

It’ll probably just turn out to some obscure, Japan-only mobile card battler, or maybe, just maybe, it’ll turn out to be the greatest convergence of Capcom fan service ever before witnessed. Let’s forget all about Capcom Fighting Jam, shall we? All is forgiven, Capcom: just give me the chance to piledriver Hugo’s face with a 3D Mike Haggar and we’ll call it even. I’m counting on you.

Double Fine gets a Humble Bundle and forgets themselves again

What is it with gamers and their unusual attachments to large, often hairy men? Father issues? A yearning for the days when they still believed in Santa Claus? Or perhaps just a simple appreciation of the games we are able to play thanks to the likes of Gabe Newell and Tim Schafer. Me, I’m a Schafer man. As such, whenever the guy calls to ask for some money, I’m more than happy to oblige.

The Double Fine tradition of Amnesia fortnight: where the staff down tools on their current major project and work on something completely different for two weeks, is quite well-known by now. Everyone in the company pitches their games, teams are decided and prototypes made. Many moons ago, these projects would never be seen outside of those hallowed company walls, that is until the likes of Costume Quest, Trenched, Stacking and Once Upon A Monster all proved too amazing to simply throw away.

This year, Double Fine have teamed up with the fine folks over at Humble Bundle in order to allow us, the gaming public, to participate in their unique tradition. Pay whatever you want and gain access to prototype builds from previous years’ game pitches, as well as the right to vote on what game(s) you think Double Fine should make next. I’m already in and rooting for Kaiju Piledriver, but in all honesty I’d settle for a Costume Quest 2. 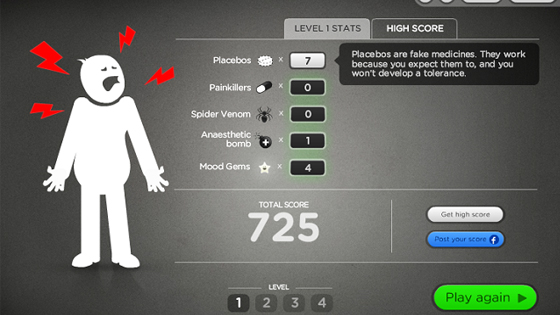 Fight pain and confront your own mortality with a flash game

Man, I love me some painkillers. Sometimes I worry about my dependency on them and the impending resistance that I’m going to build up. Then there’s the fact that I rely on caffeine to regulate my sleeping and waking states. Ahh, the modern world. Games are a great way to forget about my impending health problems, so why the hell would I want to be confronted with unsettling truths in my one solace from worry?

I suppose I’m just a glutton for punishment, as I’ve been playing Ouch, a web game featured on the British Science Museum site that tasks you with eliminating different levels of pain. With painkillers, placebos, anaesthetic bombs and good mood clouds all at your disposal, you must fight off incoming waves of pain. Pay attention to the resistance you build as the medicine becomes less effective the more you use it. It’s fun, but also a brutal reminder that I’m going to die young thanks to my quick-fix mentality.

If there’s one thing missing from the world of video games commentary, it’s some genuine humour. God knows I try, but I just can’t seem to stop talking about wanking for long enough to write decent jokes. Thankfully, OXM Breakdown – a video series uploaded by the UK’s official XBOX magazine – seems to be onto something.

Along with being genuinely funny in parts, this episode also provides some interesting commentary on sexism in gaming. Suddenly, the hackneyed frat boy antics of Mega 64 seem like a distant memory and I am at peace once more. The whole series comes highly recommended, particularly the Hitler special, which isn’t as offensive as you’d think.

Looking back, this has been a pretty British-heavy installment of Press Start, what with Peter Molyneux, the OXM Breakdown and the British Science Museum all getting a mention. My American friends, for this I am truly sorry. I would have busted out some sort of Thanksgiving Special if I knew the first thing about it. From what I can tell, you all offer sacrifice up to the giant Turkey guardians of your glass cities in order to dissuade them from rampaging through and destroying your homes and businesses. Admittedly, I’m not 100% sure that’s how it works, but don’t bother correcting me, though: I’ll never learn.