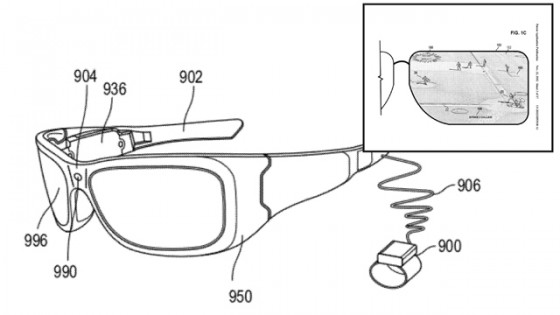 A patent application published yesterday reveals that Microsoft is sitting on plans for its own version of Google’s Project Glass.

Unlike Google’s glasses, which seem to be intended for general all-day wear—if you like that kind of thing—Microsoft’s patent appears to describe more specific scenarios for use. Indeed, images in the patent depict how the glasses could be used to augment action at live events, like sports games.

The patent application suggests a pair of glasses would throw up text, images and audio on a head-up display—kind of a second screen, just one that’s strapped to your face. That means instant replays at the football, subtitled lyrics at concerts, or instant stats when a player walks onto the pitch.

It’s worth pointing out that this is just one patent, and it was submitted back in May 2011. So, if Microsoft is working on a pair of glasses, much progress has probably been made by Ballmer and co beyond what we see here. Or the project could be languishing in a dusty drawer somewhere—we just don’t know. [USPTO via Unwired View]