Archives
« Saturn’s moon DIONE got that crater face, but we still love her.
HARRISON FORD may be open to returning for ‘EPISODE VII.’ I am in an alternate universe. » 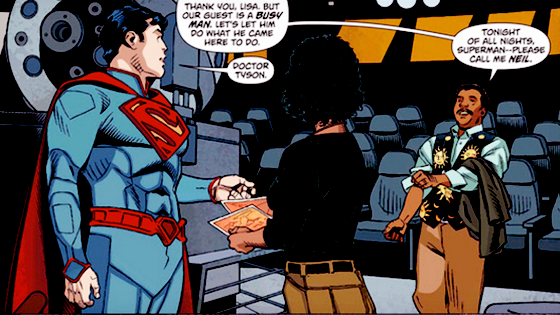 This won’t get me to buy Action Comics, but it is certainly fucking awesome. I’m loving the hell out of how ubiquitous Neil is becoming in our pop culture. All Neil everything! Into infinity! Just when you were pondering where he would appear next, dude is dropping knowledge bombs on Clark’s silly ass within the world of the Super-Men.

Astrophysicist Neil deGrasse Tyson is famed as host of PBS’s NOVA scienceNOW and as a frequent guest on The Daily Show and The Colbert Report. But as of this week, he’ll also be known as the man who located Krypton.

In a story called “Star Light, Star Bright” in Action Comics #14, which goes on sale Wednesday, Tyson himself helps Superman find his homeworld on the last day of its existence.

“As a native of Metropolis, I was delighted to help Superman, who has done so much for my city over all these years,” Tyson said. “And it’s clear that if he weren’t a superhero he would have made quite an astrophysicist.”

In reality, using information provided by DC Comics, the director of the Hayden Planetarium at the American Museum of Natural History did pinpoint a red dwarf star capable of supporting of Krypton-like planet in the constellation Corvus — 27.1 light years from Earth. The star can be seen at right ascension 12 hours, 10 minutes, 05.60 seconds, and declination 15 degrees, 04’ 15.66.

“This is a major milestone in the Superman mythos that gives our Super Hero a place in the universe,” said DC Entertainment Co-Publisher Dan DiDio. “Having Neil deGrasse Tyson in the book was one thing, but by applying real world science to this story he has forever changed Superman’s place in history. Now fans will be able to look up at the night’s sky and say – ‘that’s where Superman was born.’”