Archives
« This Week on The Walking Dead: Sick
Rumor: Frank Grillo to play Crossbones in ‘CAPTAIN AMERICA: THE WINTER SOLDIER’ »

Joe Madureira leaves Vigil games to focus on comics. My 1994 self is losing its mind. 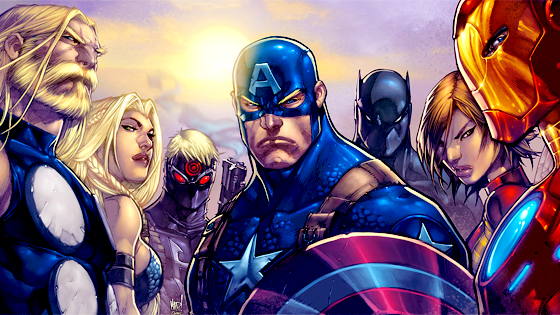 Joe Madureira was like, the jam. Man. Way back in the day, I was obsessed with the guy. Then he stopped drawing watermelon boobs and hands the size of basketballs to tool around on other projects. Which is probably for the best, allowing me to not actively figure out how much I didn’t enjoy his style any longer. Now the dude is returning to comics though seemingly full time, and my past self is pretty excited.

Joe Madureira has announced he’s leaving Vigil Games, the Austin, Texas-based studio he co-founded in 2005, “to move on to new adventures” — among them, comics. And at the top of the list is Marvel.

“I’ll be talking more about ‘The Next Big Thing’ in the coming months, but in the short term, I’m focusing on banging out a bunch of comics,” he wrote Monday on his Facebook page. “Which should hopefully sate your hunger, you bloodthirsty savages!”

Making a splash in 1994 with his run on Marvel’s Uncanny X-Men, Madureira garnered a devoted fan following with his much-delayed, and never-finished, WildStorm/Cliffhanger series Battle Chasers before making the jump to video games as a character designer and, eventually, creative director for THQ, where he helped to develop Darksiders. He returned to comics in 2008 with Marvel’s The Ultimates 3, with writer Jeph Loeb, and then teamed with writer Zeb Wells late last year for the first three issues ofAvenging Spider-Man. Marvel Editor-in-Chief promised in March that Wells and Madureira would reunited for a planned Spider-Man/Wolverine/Elektra story, telling Comic Book Resources “it has changed shape and is becoming a slightly bigger project” (he even teased a page of art from the “secret” project).

“Yes, the Marvel stuff is still happening,” Madureira wrote last night. “As I mentioned, this will be my focus for a bit as Marvel has been extraordinarily patient with me as pages slowly trickled in while I was also Vigil’s Creative Director. Before I do ANYthing else I need to get some books done!”